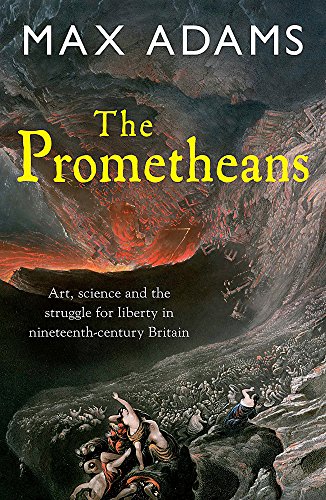 The Prometheans
by Max Adams

Used Price
9,99 $
Free Shipping in the US
The story of four maverick brothers, and a thrillingly ambitious portrait of Britain in an era of technological and political revolution.
Reviews:
Trustpilot
Very Good

The Prometheans: John Martin and the generation that stole the future by Max Adams

The richly varied lives of the Martin brothers reflected the many upheavals of Britain in the age of Industrial Revolution. Low-born and largely unschooled, they were part of a new generation of artists, scientists and inventors who witnessed the creation of the modern world. William, the eldest, was a cussedly eccentric inventor who couldn't look at a piece of machinery without thinking about how to improve it; Richard, a courageous soldier, fought in the Peninsular War and at Waterloo; Jonathan, a hellfire preacher tormented by madness and touched with a visionary genius reminiscent of William Blake, almost burned down York Minster in 1829; while John, the youngest Martin, single-handedly invented, mastered and exhausted an entire genre of painting, the apocalyptic sublime, while playing host to the foremost writers, scientists and thinkers of his day. In The Prometheans Max Adams interweaves the fascinating story of these maverick siblings with a magisterial and multi-faceted account of the industrial, political and artistic ferment of early 19th-century Britain. His narrative centres on a generation of inventors, artists and radical intellectuals (including the chemist Humphry Davy, the engineer George Stephenson, the social reformer Robert Owen and the poet Shelley) who were seeking to liberate humanity from the tyranny of material discomfort and political oppression. For Adams, the shared inspiration that binds this generation together is the cult of Prometheus, the titan of ancient Greek mythology who stole fire from Zeus to give to mortal man, and who became a potent symbol of political and personal liberation from the mid-18th century onwards. Whether writing about Davy's invention of the miner's safety lamp, the scandalous private life of the Prince Regent, the death of Shelley or J.M.W. Turner's use of colour, Adams's narrative is pacy, characterful, and rich in anecdote, quotation and memorable character sketch. Like John Martin himself, he has created a sprawling and brightly coloured canvas on an epic scale.

'An intriguing look at the impact on Britain of the first industrial revolution... fascinating... wonderfully eclectic' The Good Book Guide. * Good Book Guide *
'Max Adams has undertaken something new in The Prometheans; he has done it dazzlingly' Guardian. * Guardian *
'...succeeds brilliantly as a biography of a family and place. Writing of an age before rigid disciplinary boundaries, Adams illuminates the links between a generation of artistic and scientific visionaries' James Grande, Independent on Sunday. * Independent on Sunday *

Max Adams is the author of the widely praised Admiral Collingwood: Nelson's Own Hero. An archaeologist and TV documentary writer/producer, he lives and works in Newcastle.

Acknowledgements. List of illustrations. Forethought. The chains of slavery. The rights of man. Children of the Revolution. Mechanics of war. Brothers in arms. A million fires. Peace divided. A light in the darkness. Belshazzar's Feast. Paradise Lost. Playing with fire. The 'democratical' principle. Babylon-on-Thames. Survivors. Judgement. Notes and references. Bibliography. Index.

GOR003775236
The Prometheans: John Martin and the generation that stole the future by Max Adams
Max Adams
Used - Very Good
Paperback
Quercus Publishing
2010-03-04
336
1849161739
9781849161732
N/A
Book picture is for illustrative purposes only, actual binding, cover or edition may vary.
This is a used book - there is no escaping the fact it has been read by someone else and it will show signs of wear and previous use. Overall we expect it to be in very good condition, but if you are not entirely satisfied please get in touch with us.