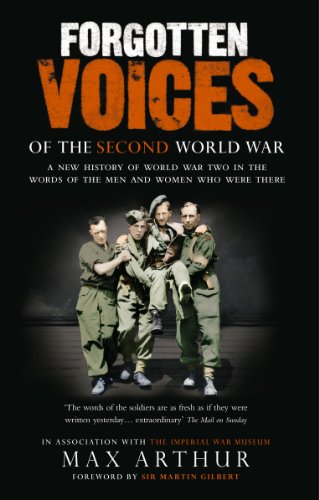 Forgotten Voices Of The Second World War
by Max Arthur

In Stock
$6.99
The Imperial War Museum holds a vast archive of interviews with soldiers, sailors, airmen and civilians of most nationalities who saw action during WW2.
Very Good
7 in stock

The Imperial War Museum holds a vast archive of interviews with soldiers, sailors, airmen and civilians of most nationalities who saw action during WW2. As in the highly-acclaimed Forgotten Voices of the Great War, Max Arthur and his team of researchers spent hundreds of hours digging deep into this unique archive, uncovering tapes, many of which have not been listened to since they were created in the early 1970s. The result will be the first complete oral history of World War 2. We hear at first from British, German and Commonwealth soldiers and civilians. Accounts of the impact of U.S. involvement after Pearl Harbour and the major effects it had on the war in Europe and the Far East is chronicled in startling detail, including compelling interviews from U.S. and British troops who fought against the Japanese. Continuing through from D-Day, to the Rhine Crossing and the dropping of the Atom Bomb in August 1945, this book is a unique testimony to one of the world's most dreadful conflicts. One of the hallmarks of Max Arthur's work is the way he involves those left behind on the home front as well as those working in factories or essential services. Their voices will not be neglected.

"These stories are so harrowing, their witness so precise and devastating" * The Times *
"With the rawness and immediacy that only this kind of oral history can provide" * Sunday Times *
"An extraordinary and immensely moving book" -- Stephen Fry
"A unique collection of personal testimonies ... a timely reminder of the sacrifices and horrors of war" * Sunday Express *
"The sound of real human voices: bewildered, sad, often angry, sometimes bitter, but for the most part remarkable ... a shattered relay-race of narrative gives the book a ghostly, choric poetry" * Telegraph *

Acclaimed author Max Arthur specialises in first-hand recollections of historical events. Previous titles include The Manchester United Air Crash; Above All Courage; Northern Ireland: Soldiers Talking; Men of the Red Beret; There Shall Be Wings: The RAF 1918 to the Present; The True Glory: The Royal Navy 1914 to Present.

GOR001246053
Forgotten Voices Of The Second World War: A New History of the Second World War in the Words of the Men and Women Who Were There by Max Arthur
Max Arthur
Used - Very Good
Paperback
Ebury Publishing
2005-05-05
496
0091897351
9780091897352
N/A
Book picture is for illustrative purposes only, actual binding, cover or edition may vary.
This is a used book - there is no escaping the fact it has been read by someone else and it will show signs of wear and previous use. Overall we expect it to be in very good condition, but if you are not entirely satisfied please get in touch with us.