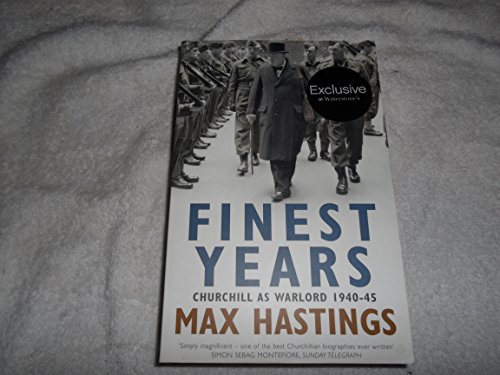 Pre-eminent military historian Max Hastings presents Winston Churchill as he has never been seen before.

Pre-eminent military historian Max Hastings presents Winston Churchill as he has never been seen before.

Winston Churchill was the greatest war leader Britain ever had. In 1940, the nation rallied behind him in an extraordinary fashion. But thereafter, argues Max Hastings, there was a deep divide between what Churchill wanted from the British people and their army, and what they were capable of delivering. Himself a hero, he expected others to show themselves heroes also, and was often disappointed. It is little understood how low his popularity fell in 1942, amid an unbroken succession of battlefield defeats. Some of his closest colleagues joined a clamour for him to abandon his role directing the war machine. Hastings paints a wonderfully vivid image of the Prime Minister in triumph and tragedy. He describes the 'second Dunkirk' in 1940, when Churchill's impulsiveness threatened to lose Britain almost as many troops in north-west France as had been saved from the beaches; his wooing of the Americans, and struggles with the Russians. British wartime unity was increasingly tarnished by workers' unrest, with many strikes in mines and key industries.

By looking at Churchill from the outside in, through the eyes of British soldiers, civilians and newspapers, and also those of Russians and Americans, Hastings provides new perspectives on the greatest Englishman. He condemns as folly Churchill's attempt to promote mass uprisings in occupied Europe, and details 'Unthinkable', his amazing 1945 plan for an Allied offensive against the Russians to liberate Poland. Here is an intimate and affectionate portrait of Churchill as Britain's saviour, but also an unsparing examination of the wartime nation which he led and the performance of its armed forces.

`"Nemesis" is a triumph...provocative, insightful ....impressive......Put all these elements together - the ambition, insight, sureness of touch - and you have a book of real quality.' Sunday Times

`Spectacular...Hastings makes important points about the war in the East that have been all too rarely heard...excellent...compelling...searingly powerful.' Sunday Telegraph

`As Hastings brilliantly describes, conditions for fighting men on both sides were appalling...the fire-bombing of Tokyo and the decision to drop the atomic bombs were influenced by the urge to "get this business over with", but the argument, as Hastings explains so well with his usual exemplary judgement, is far more complex.' Financial Times

`He writes with colour and decisiveness...His depiction of Japanese intransigence, brutality and self-delusion and the cultural chasms between East and West are particularly vivid' Sunday Telegraph

GOR002299678
Finest Years: Churchill as Warlord 1940-45 by Sir Max Hastings
Sir Max Hastings
Used - Very Good
Paperback
HarperCollins Publishers
2010-05-27
664
0007371594
9780007371594
N/A
Book picture is for illustrative purposes only, actual binding, cover or edition may vary.
This is a used book - there is no escaping the fact it has been read by someone else and it will show signs of wear and previous use. Overall we expect it to be in very good condition, but if you are not entirely satisfied please get in touch with us.