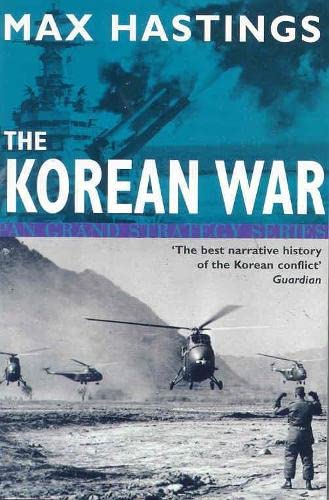 Used Price
$11.69
Free Shipping in the US
From one of Britain's most respected and popular historians comes 'the best narrative history of the Korean conflict' (Guardian)
Reviews:
Trustpilot
Very Good

`A brilliant and compelling book which must rank, even by the standards Max Hastings has set, as a masterpiece' Professor Michael Howard, London Review of Books

On 25 June 1950, the invasion of South Korea by the Communist North launched one of the bloodiest and most devastating conflicts of our battle-scarred century. The seemingly limitless power of the Chinese-backed North was thrown against the ferocious firepower of teh UN-backed South in a war that can be seen today as the stark prelude to Vietnam. Max Hastings, the acclaimed author of Overlord and Bomber Command, has drawn on first-hand accounts of those who fought on both sides to produce this vivid and incisive reassessment of the Korean War, bringing the military and human dimensions of the conflict into sharp focus.

`Excellent, readable history by a master of the genre' Daily Mail

`The description of the stand of the Gloucesters on the Imjin is exemplary. Hastings has spared no pains to dig deep in search of the real truth, and to seek out and interview those who took part in the events he chronicles with such finely balanced judgement' Field Marshall Lord Carver, Times Literary Supplement

Stephen E. Ambroseauthor of "Eisenhower: The President" and "Nixon: The Education of a Politician"Rings true and will surely stand the test of time....Max Hastings has no peer as a writer of battlefield history.

Sir Max Hastings, author of numerous books including Armageddon, Going to the Wars, and Das Reich, was editor of the Daily Telegraph for almost a decade, then for six years he edited the Evening Standard. In his youth he was a foreign correspondent for newspapers and BBC television. He has won many awards for his books and journalism, particularly his work in the South Atlantic in 1982. He was knighted in 2002 for services to journalism.

GOR001629430
Korean War by Sir Max Hastings
Sir Max Hastings
Used - Very Good
Paperback
Pan Macmillan
2000-01-07
512
0330392883
9780330392884
N/A
Book picture is for illustrative purposes only, actual binding, cover or edition may vary.
This is a used book - there is no escaping the fact it has been read by someone else and it will show signs of wear and previous use. Overall we expect it to be in very good condition, but if you are not entirely satisfied please get in touch with us.