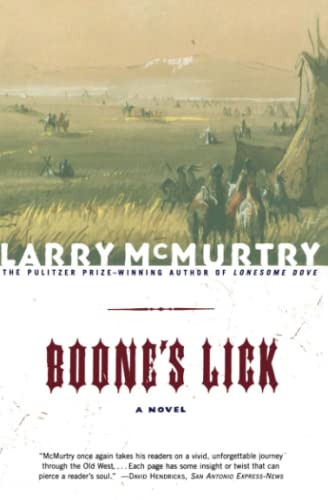 Used Price
$20.99
Free Shipping in the US
Master storyteller McMurtry unfurls a bright banner of a book following the fortunes of the Cecil family as they travel from Boone's Lick, Missouri, to the Western frontier. Fifteen-year-old Shay narrates, describing the journey that begins when his Ma decides to hunt down her elusive husband to tell him she's leaving him.
Reviews:
Trustpilot
Very Good Good

Larry McMurtry returns to the Old West in a fast-moving, comic tale about a woman determined to conquer anything that stands in the way of an ultimate confrontation with her wayward husband.
In his first historical novel in ten years, Larry McMurtry introduces Mary Margaret, a nineteenth-century version of the formidable, unforgettable Aurora Greenway of Terms of Endearment. Mary Margaret is married to Dickie, who hauls supplies to the forts along the Oregon Trail and, as Mary Margaret rightly suspects, enjoys the pleasures of other women across most of the frontier. Fed up and harboring a secret love of her own, she collects the kids; her brother-in-law, Seth; her sister, Rosie; and her cranky father and makes her way westward to settle things once and for all.
The story of their trek across the country is packed with the elements McMurtry fans love: encounters with historical figures such as Wild Bill Hickock and U.S. Army colonel Fetterman (whose incompetence resulted in one of the bloodiest massacres in the history of the American West), larger-than-life fictional characters who join the family on their journey, and confrontations with nature at its wildest. With characters based on actual traders of the Old Santa Fe Trail, Boone's Lick is vintage McMurtry.

The New York Times Book Review McMurtry at his best: colloquial, poetic, gently elegiac.
David Hendricks San Antonio Express-News McMurtry once again takes his readers on a vivid, unforgettable journey through the Old West....Each page has some insight or twist that can pierce a reader's soul.

Larry McMurtry is the author of twenty-nine novels, including the Pulitzer Prize-winning Lonesome Dove, three memoirs, two collections of essays, and more than thirty screenplays. He lives in Archer City, Texas.

GOR003079018
Boone'S Lick by Mcmurtry
Mcmurtry
Used - Very Good
Paperback
Simon & Schuster
2001-10-29
288
074321627X
9780743216272
N/A
Book picture is for illustrative purposes only, actual binding, cover or edition may vary.
This is a used book - there is no escaping the fact it has been read by someone else and it will show signs of wear and previous use. Overall we expect it to be in very good condition, but if you are not entirely satisfied please get in touch with us.