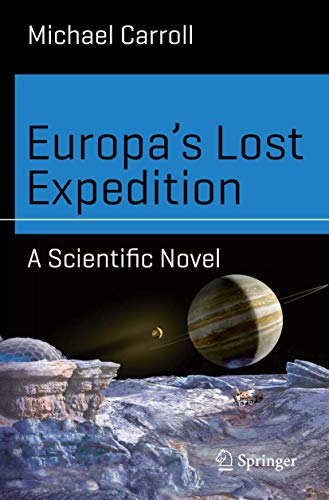 Used Price
$22.99
Free Shipping in the US
The deaths have all the symptoms of some sort of plague, despite Europa's seemingly sterile environment.

Besides providing thrills, a science section covers the very latest in undersea robotics, discussing the assets future explorers may have available for exploring subsurface oceans on moons including Europa, Enceladus and Titan.

This classically styled, chilling murder mystery about an expedition under the ice of Jupiter's ocean moon Europa, backed up by the latest scientific findings on this icy satellite. The science fiction premise explores real possibilities of exploring other bodies in the Solar System, including probing their possible astrobiology. Now that the most recent world war has concluded on Earth, human explorers are returning to exploration, carrying out a full-court press to journey into the alien abyss using tele-operated biorobotics and human-tended submersibles. Nine scientists head out to Jupiter's icy ocean-moon. But at Europa's most remote outpost, one by one, the team members who shared the cruise out begin to die under suspicious circumstances. All was well until humans begin diving into Europa's subsurface ocean. The deaths have all the symptoms of some sort of plague, despite Europa's seemingly sterile environment.

Besides providing thrills, a science section covers the very latest in undersea robotics, discussing the assets future explorers may have available for exploring subsurface oceans on moons including Europa, Enceladus and Titan. The book explores the most recent results in Europa research, from safe radiation levels for human habitation, landing sites, subsurface ocean currents and makeup, possible plate tectonics, geyser activity on the surface, volcanic activity on the ocean floor, and Europa's bizarre exosphere. The book also covers extremophiles and the various possible biomes on-and inside of-Europa.

Author/artist Michael Carroll received the AAS Division of Planetary Science's Jonathan Eberhart Award for the best planetary science feature article of 2012, an article based on his Springer book Drifting on Alien Winds. He lectures extensively in concert with his various books, and has done invited talks at science museums, aerospace facilities, and NASA centers. His two decades as a science journalist have left him well-connected in the planetary science community. He is a Fellow of the International Association for the Astronomical Arts, and has written articles and books on topics ranging from space to archeology. His articles have appeared in Popular Science, Astronomy, Sky and Telescope, Astronomy Now (UK), and a host of children's magazines. His twenty-some titles also include Alien Volcanoes (Johns Hopkins University Press), Space Art (Watson Guptill), The Seventh Landing (Springer 2009), and Drifting on Alien Winds (Springer 2011). His latest book, his fifth from Springer, is Springer's Science and Fiction series novel On the Shores of Titan's Farthest Sea (2015).

Carroll has done commissioned artwork for NASA, the Jet Propulsion Laboratory and several hundred magazines throughout the world, including National Geographic, Time, Smithsonian, Astronomy, and others. One of his paintings is on the surface of Mars-in digital form-aboard the Phoenix lander. Carroll is the 2006 recipient of the Lucien Rudaux Award for lifetime achievement in the Astronomical Arts.

GOR010064824
Europa's Lost Expedition: A Scientific Novel by Michael Carroll
Michael Carroll
Science and Fiction
Used - Very Good
Paperback
Springer International Publishing AG
2016-09-27
224
3319431587
9783319431581
N/A
Book picture is for illustrative purposes only, actual binding, cover or edition may vary.
This is a used book - there is no escaping the fact it has been read by someone else and it will show signs of wear and previous use. Overall we expect it to be in very good condition, but if you are not entirely satisfied please get in touch with us.