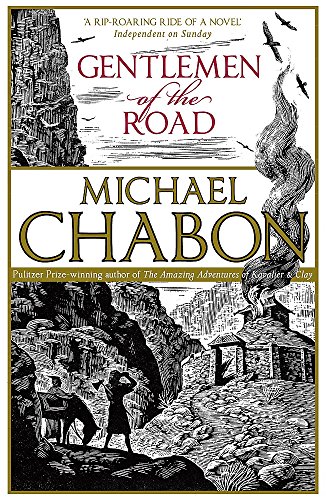 Gentlemen of the Road
by Michael Chabon

A spellbinding yarn set a thousand years ago along the ancient Silk Road, by the Pulitzer Prize-winning author of The Amazing Adventures of Kavalier & Clay

Gentlemen of the Road Summary

Gentlemen of the Road by Michael Chabon

GENTLEMEN OF THE ROAD is set in the Kingdom of Arran, in the Caucasus Mountains, between the Black Sea and the Caspian Sea, A.D. 950. It tells the tale of two wandering adventurers and unlikely soulmates, variously plying their trades as swords for hire, horse thieves and con artists - until fortune entangles them in the myriad schemes and battles that follow a bloody coup in the medieval Jewish empire of the Khazars. Hired as escorts for a fugitive prince, they quickly find themselves half-willing generals in a mad rebellion, struggling to restore the prince's family to the throne. As their increasingly outrageous exploits unfold, they encounter a wondrous elephant, wily Rhadanite tradesmen, whores, thieves, soldiers, an emperor, and discover the truth about their young royal charge.

Beautifully illustrated throughout, this is a novel brimming with raucous humour and cliff-hanging suspense, combining the spirit of The Arabian Nights with the action of The Three Musketeers.

Gentlemen of the Road Reviews

Every page holds a twist, while the prose is rich, but perfect in its control, and its calibration between the poetic and the exotic . . . readers might feel that they have reached the book equivalent of the Promised Land. * The Times *
It's been a while since I had such fun reading a book . . . It's like dipping into a leather-bound chronicle full of exciting legends and reminded me of the fathomless pleasure with which I used to read as a child. I was rapt. * Daily Telegraph *
From the opening sentence of this rip-roaring, swashbuckling yarn, you know you're in the hands of a master . . . That level of brio, invention and panache continues at breakneck pace throughout . . . smart, clever and stylish * Scotland on Sunday *
A rip-roaring ride of a novel * Independent on Sunday *
Intricate and exuberant . . . It's hard to resist its gathering momentum, not to mention the sheer headlong pleasure of Chabon's language. * New York Times Book Review *
a celebration of male friendship * Sunday Telegraph *
great fun * Sunday Times *

Michael Chabon`s novels include THE MYSTERIES OF PITTSBURGH, Wonder Boys, the Pulitzer Prize-winning The Amazing Adventures of Kavalier & Clay and his latest, The Yiddish Policemen`s Union, published by Fourth Estate. He is also the author of two collections of short stories, a young adult novel, and has written several screenplays. THE MYSTERIES OF PITTSBURGH is currently being made into a film starring Sienna Miller.

GOR001226172
Gentlemen of the Road by Michael Chabon
Michael Chabon
Used - Very Good
Paperback
Hodder & Stoughton General Division
2007-01-01
224
0340953551
9780340953556
N/A
Book picture is for illustrative purposes only, actual binding, cover or edition may vary.
This is a used book - there is no escaping the fact it has been read by someone else and it will show signs of wear and previous use. Overall we expect it to be in very good condition, but if you are not entirely satisfied please get in touch with us.