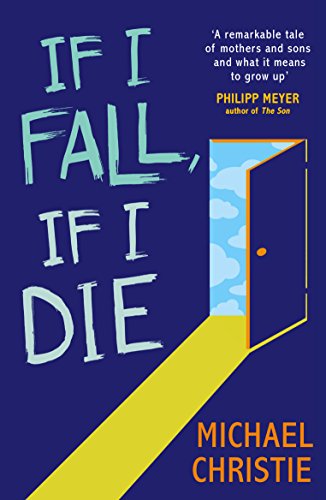 If I Fall, If I Die
by Michael Christie

Used Price
$9.39
Free Shipping in the US
He eventually meets and befriends Jonah, a quiet boy who introduces him to skateboarding.

Will welcomes his new world with enthusiasm, his fears fading and his body hardening with each new bump, scrape and fall.

If I Fall, If I Die Summary

If I Fall, If I Die by Michael Christie

A heartfelt and wondrous debut lauded by Philipp Meyer (New York Times bestselling author of The Son) as "astonishing", introducing a supremely gifted and exciting new voice in fiction.

Will has never been to the outside, at least not since he can remember.

And he has certainly never got to know anyone other than his mother, a fiercely loving yet wildly eccentric agoraphobe who drowns in panic at the thought of opening the front door. Their little world comprises only the rooms in their home, each named for various exotic locales and filled with Will's art projects. But soon the confines of his world close in on him.

Despite his mother's protests, Will ventures outside clad in a protective helmet and braces himself for danger. He eventually meets and befriends Jonah, a quiet boy who introduces him to skateboarding.

Will welcomes his new world with enthusiasm, his fears fading and his body hardening with each new bump, scrape and fall. But life quickly gets complicated. When a local boy goes missing, Will and Jonah want to uncover what happened. They embark on an extraordinary adventure that pulls Will far from the confines of his closed-off world and into the throes of early adulthood and the dangers that everyday life offers.

If I Fall, If I Die is a remarkable debut full of dazzling prose and unforgettable characters, as well as a poignant and heartfelt depiction of coming of age.

Customer Reviews - If I Fall, If I Die

If I Fall, If I Die Reviews

This exceptional debut novel is a warm, often funny dramatisation of the balance between anxious love and worthwhile risk * Sunday Times *
A master of his environment, Christie is also deft at inhabiting the mind of a child in his writing ... powerful and page-turning ... A first novel that is complex, symbolic and a little bit wondrous. * Sunday Business Post *
A captivating debut novel * Scotsman *
An astonishing piece of work. Christie combines lyrical prose and true-to-life characters-and skateboarding-to craft a remarkable tale of mothers and sons, and what it means to grow up. -- Philipp Meyer, author of The Son
There are moments of real tenderness, and real strangeness too, as Will gradually embraces risk and seeks friendship. It feels less part of some sub-genre cooked up by the marketing department than a contribution to a real, archetypal literary tradition, that of the coming-of-age story. * Spectator *

Michael Christie received an MFA from the University of British Columbia and is a former professional skateboarder. His story collection, The Beggar's Garden, was a finalist for a number of major Canadian prizes and the winner of the City of Vancouver Book Award. He lives with his family on Galiano Island, British Columbia. If I Fall, If I Die is his debut novel.

GOR007070785
If I Fall, If I Die by Michael Christie
Michael Christie
Used - Very Good
Paperback
Cornerstone
2015-12-03
336
0099591863
9780099591863
N/A
Book picture is for illustrative purposes only, actual binding, cover or edition may vary.
This is a used book - there is no escaping the fact it has been read by someone else and it will show signs of wear and previous use. Overall we expect it to be in very good condition, but if you are not entirely satisfied please get in touch with us.