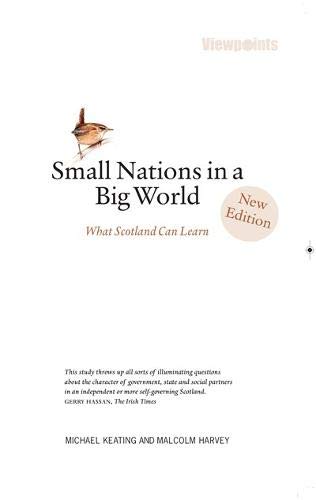 Small Nations in a Big World
by Michael Keating

Used Price
$17.49
Free Shipping in the US
Some accept market logic and take the `low road' of low wages, low taxes and light regulation, with a correspondingly low level of public services.
Reviews:
Trustpilot
Very Good

Small Nations in a Big World: What Scotland Can Learn by Michael Keating

Small northern European states have been a major point of reference in the Scottish independence debate. For nationalists, they have been an `arc of prosperity' while in the aftermath of the financial crash, unionists lampooned the `arc of insolvency'.

Both characterisations are equally misleading. Small states can do well in the global market place, but they face the world in very different ways. Some accept market logic and take the `low road' of low wages, low taxes and light regulation, with a correspondingly low level of public services. Others take the `high road' of social investment, which entails a larger public sector and higher taxes. Such a strategy requires innovative government, flexibility and social partnership.

Keating and Harvey compare the experience of the Nordic and Baltic states and Ireland, which have taken very different roads and ask what lessons can be learnt for Scotland. They conclude that success is possible but that hard choices would need to be taken. Neither side in the independence debate has faced these choices squarely.

Erudite and well-researched... provides solid facts about different ways in which small states like Scotland, Ireland, the Baltic and Scandinavian countries actually work. - THE SCOTSMAN

MICHAEL KEATING is Professor of Politics at the University of Aberdeen and the University of Edinburgh and is Director of the ESRC Scottish Centre on Constitutional Change. He is a fellow of the British Academy, the Royal Society of Edinburgh and the Academy of Social Science. He has been writing about Scottish politics for forty years and is published extensively on nationalism and territorial politics throughout Europe.

MALCOLM HARVEY is a researcher at the University of Aberdeen and the Scottish Centre on Constitutional Change. His research interests include nationalist movements, party systems and constitutional change. He has written online for The Herald and Better Nation, a political website he co-founded.

GOR010075660
Small Nations in a Big World: What Scotland Can Learn by Michael Keating
Michael Keating
Used - Very Good
Paperback
Luath Press Ltd
2015-07-25
192
1910021776
9781910021774
N/A
Book picture is for illustrative purposes only, actual binding, cover or edition may vary.
This is a used book - there is no escaping the fact it has been read by someone else and it will show signs of wear and previous use. Overall we expect it to be in very good condition, but if you are not entirely satisfied please get in touch with us.