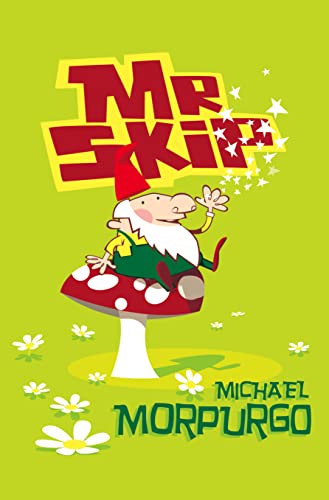 Set in Dublin where horses run wild in the fields near the tower blocks, Jackie watches the boys on the estate ride their horses and she longs to own her own horse. All Jackie has is her Gran's old donkey Barnaby, who is a stubborn as...a mule! One day, whilst rummaging in an old skip, Jackie finds a broken garden gnome whom she restores back to his former glory and gives to her Mum for her birthday. Much to her astonishment, Mr Skip talks to Jackie! Because she gave him a new lease of life, he is going to help make her dreams come true. Her wish is, of course, for her donkey to 'run like a racehorse'. Jackie challenges the boys to a race and, at first, Barnaby just refused to move. Then, she whispers the magic words into his ear - 'Do it for Mister Skip' and Barnaby tears away and wins the race. Fame and...almost fortune...come Jackie's way, with TV appearances, a film-deal and a promised million 'smackaroos'. But can Barnaby, the Superdonk, win the Irish Derby? Can Mister Skip work his magic till the very end? He does, but in a sensible, practical way. Barnaby doesn't win the Irish Derby - a donkey couldn't really, now could it? But Jackie's mum has negotiated a film and book deal, and with the money buys a little house in the country. And there they set up a Pixie Park where everyone sends their broken garden gnomes... all lovingly restored... with Mister Skip in pride of place. A lovely, warm happy ending.

This is an enchanting, modern fairytale from this prize-winning author.

GOR001244426
Mister Skip by Michael Morpurgo
Michael Morpurgo
Used - Very Good
Paperback
HarperCollins Publishers
2002-08-05
112
0007134746
9780007134748
N/A
Book picture is for illustrative purposes only, actual binding, cover or edition may vary.
This is a used book - there is no escaping the fact it has been read by someone else and it will show signs of wear and previous use. Overall we expect it to be in very good condition, but if you are not entirely satisfied please get in touch with us.