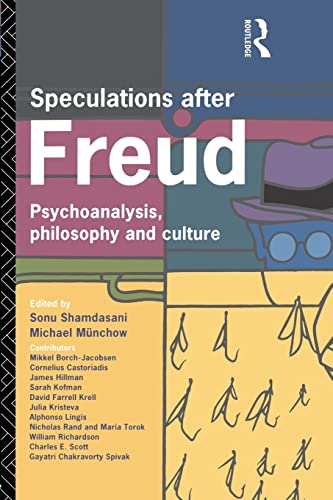 Speculations After Freud
by Michael Munchow

Used Price
$13.99
Free Shipping in the US
This collection of essays considers the interrelationship of psychoanalysis, philosophy, and cultural studies, and questions the future of a discipline which has emerged from the intimate experience of therapy to exert a powerful hold over contemporary culture.
Reviews:
Trustpilot
Very Good Good

Speculations After Freud: Psychoanalysis, Philosophy and Culture by Michael Munchow

These are excellent essays raising provocative questions about psychoanalysis as a therapeutic practice, an interpretive method, and a cultural ideology. Highly recommended.

Introduction The Censure of the Speculative Sonu Shamdasani 1. Psychoanalysis and Politics Cornelius Castoriadis 2. Psychoanalysis in Time of Distress Julia Kristeva 3. Man is By Nature a Political Animal, or Patient as Citizen James Hillman 4. Psychoanalysis in Left-Field and Field-Working Gayatri Chakravorty Spivak 5. The Alibis of the Subject. Lacan and Philosophy Mikkel Borch-Jacobsen 6. It Is Only the First Step That Costs Sarah Kofman 7. Lust Alphonso Lingis 8. Immanent Death, Imminent Death David Farrell Krell 9. The Word of Silence William Richardson 10. The Sandman Looks at the Uncanny Nicholas Rand and Maria Torok 11. The Pleasure of Therapy Charles E.Scott

GOR005254760
Speculations After Freud: Psychoanalysis, Philosophy and Culture by Michael Munchow
Michael Munchow
Used - Very Good
Paperback
Taylor & Francis Ltd
1994-05-26
248
0415076560
9780415076562
N/A
Book picture is for illustrative purposes only, actual binding, cover or edition may vary.
This is a used book - there is no escaping the fact it has been read by someone else and it will show signs of wear and previous use. Overall we expect it to be in very good condition, but if you are not entirely satisfied please get in touch with us.