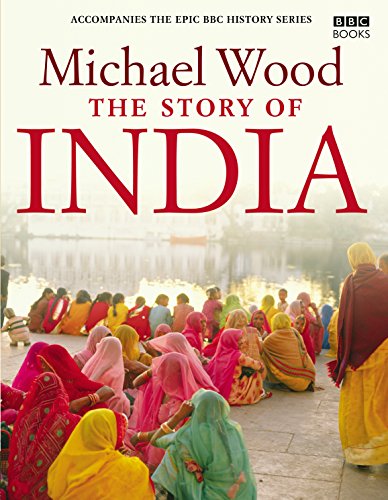 The Story of India
by Michael Wood

In Stock
$13.99
In this lavishly illustrated companion to his BBC TV series, Michael Wood weaves a spellbinding narrative out of the 10,000-year history of India.
Like New Very Good
6 in stock

The Story of India Summary

The Story of India by Michael Wood

In this lavishly illustrated companion to his BBC TV series, Michael Wood weaves a spellbinding narrative out of the 10,000-year history of India. Home today to more than a fifth of the world's population, the subcontinent gave birth to the oldest and most influential civilization on Earth, to four world religions, and to the world's largest democracy. Now, as India bids to become a global giant, Michael sets out to trace the roots of India's present in the incredible riches of her past. From the Khyber Pass and the Himalayas to the tropical jungles of India's Deep South, this original and striking survey of Indian history provides vivid portraits of India's regions and cultures, and new insights into some of history's greatest figures: the Buddha and Ashoka, Samudragupta and Akbar the Great, Nehru and Gandhi. It explores the ways in which Indian ideas and inventions have shaped the history of the world, and shows how some of ancient India's conclusions about the nature of civilization have lost none of their relevance for our own times. Dazzling colour photographs capture an extraordinary spectrum of landscapes, architectural splendours, customs, rituals and festivals. This sumptuously illustrated book from one of Britain's best-loved historians and broadcasters is a magical mixture of history and travelogue, and an unforgettable portrait of India, past, present - and future.

The Story of India Reviews

"Michael Wood is the maker of some of the best television documentaries ever made on history and archaeology" * Times Literary Supplement *
"Wood is a perceptive, entertaining and enthusiastic companion" * Sunday Times *
"Michael Wood is a superb teacher and story teller ... confirmation of the fact that history, well told, can be alive and compelling" * Los Angeles Times *
"A marvellously vivid portrait of India's 10,000-year-old cultural and religious history...Gorgeously illustrated and intelligently written, this is both an erudite and entertaining history" -- Clover Stroud * Sunday Telegraph *
"This is a beautifully illustrated cultural history, a traveller's tale and a compelling and readable guide to the rise and rise of a civilisation" * The Good Book Guide *

Michael Wood is a highly respected author and TV presenter. He was born in Manchester and was educated at Manchester Grammar School and Oriel College, Oxford, where he did post-graduate research in Anglo-Saxon history. A broadcaster and film-maker, Michael has over eighty documentary films to his name. BBC Books have published Michael's previous TV tie-in titles, including In the Footsteps of Alexander the Great, Conquistadors, In Search of Shakespeare and In Search of Myths and Heroes. Michael is a fellow of the Royal Historical Society.

GOR010533753
The Story of India by Michael Wood
Michael Wood
Used - Like New
Hardback
Ebury Publishing
2007-08-16
256
0563539151
9780563539155
N/A
Book picture is for illustrative purposes only, actual binding, cover or edition may vary.
This is a used book - there is no escaping the fact it has been read by someone else and it will show signs of wear and previous use. Overall we expect it to be in very good condition, but if you are not entirely satisfied please get in touch with us.