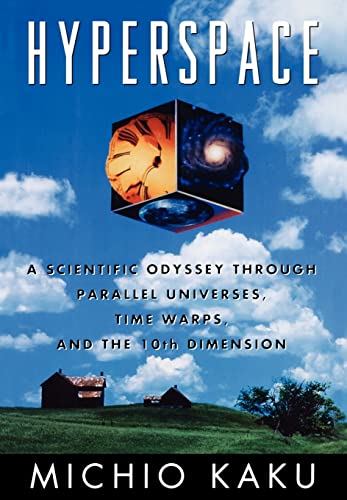 In Stock
$16.99
The author of "Beyond Einstein" offers the non-specialist reader a concise analysis of developments in modern physics. He explains the theory of hyperspace (or higher dimensional space), superstring theory, the tenth dimension, time warps, Black Holes and multiple universes.
Very Good Good
13 in stock

Hyperspace: A Scientific Odyssey Through Parallel Universes, Time Warps and the Tenth Dimension by Michio Kaku

Are there other dimensions beyond our own? Is time travel possible? Can we change the past? Are there gateways to parallel universes? All of us have pondered such questions, but there was a time when scientists dismissed these notions as outlandish speculations. Not any more. Today, they are the focus of the most intense scientific activity in recent memory. In Hyperspace, Michio Kaku, author of the widely acclaimed Beyond Einstein and a leading theoretical physicist, offers the first book-length tour of the most exciting (and perhaps most bizarre) work in modern physics, work which includes research on the tenth dimension, time warps, black holes, and multiple universes. The theory of hyperspace (or higher dimensional space) - and its newest wrinkle, superstring theory - stand at the center of this revolution, with adherents in every major research laboratory in the world, including several Nobel laureates. Beginning where Hawking's Brief History of Time left off, Kaku paints a vivid portrayal of the breakthroughs now rocking the physics establishment. Why all the excitement? As the author points out, for over half a century, scientists have puzzled over why the basic forces of the cosmos - gravity, electromagnetism, and the strong and weak nuclear forces - require markedly different mathematical descriptions. But if we see these forces as vibrations in a higher dimensional space, their field equations suddenly fit together like pieces in a jigsaw puzzle, perfectly snug, in an elegant, astonishingly simple form. This may thus be our leading candidate for the Theory of Everything. If so, it would be the crowning achievement of 2,000 years of scientific investigation into matter and itsforces. Already, the theory has inspired several thousand research papers, and has been the focus of over 200 international conferences. Many leading scientists believe the theory will unlock the deepest secrets of creation and answer some of the most intriguing questions of all

Michio Kaku is Professor of Theoretical Physics at the City College of the City University of New York. He graduated from Harvard and received his Ph.D. from Berkeley. He is author of Beyond Einstein (with Jennifer Trainer), Quantum Field Theory: A Modern Introduction, and Introduction to Superstrings. He has also hosted a weekly hour-long science program on radio for the past ten years.

Notes. References. Index. Part I: Entering the Fifth Dimension. 1: Worlds beyond space and time. 2: Mathematicians and mystics. 3: The man who "saw" the fourth dimension. 4: The secret of light: vibrations in the fifth dimension. Part II: Unification and the tenth dimension. 5: Quantum heresy. 6: Einstein's ravings. 7: Superstrings. 8: Signals from the tenth dimension. 9: Before creation. Part III: Wormholes: Gateways to another universe. 10: Black holes and parallel universes. 11: To build a time machine. 12: Colliding universes. Part IV: Masters of hyperspace. 13: Beyond the future. 14: Fate of the universe. 15: Conclusion

GOR001223566
Hyperspace: A Scientific Odyssey Through Parallel Universes, Time Warps and the Tenth Dimension by Michio Kaku
Michio Kaku
Used - Very Good
Hardback
Oxford University Press Inc
1994-09-22
375
0195085140
9780195085143
N/A
Book picture is for illustrative purposes only, actual binding, cover or edition may vary.
This is a used book - there is no escaping the fact it has been read by someone else and it will show signs of wear and previous use. Overall we expect it to be in very good condition, but if you are not entirely satisfied please get in touch with us.