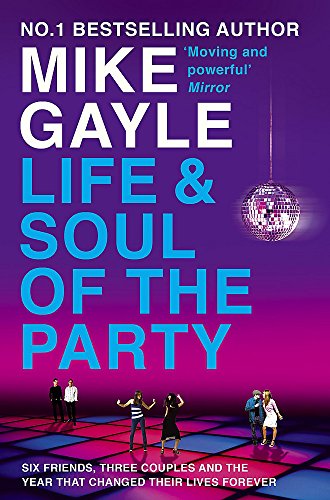 Life and Soul of the Party
by Mike Gayle

In Stock
$7,39
A brilliant romantic comedy about a year in the lives of three couples from number one bestselling author Mike Gayle, author of MY LEGENDARY GIRLFRIEND, MR COMMITMENT, TURNING THIRTY and DINNER FOR TWO
Like New Very Good
Only 1 left

Life and Soul of the Party Summary

Life and Soul of the Party by Mike Gayle

A brilliant romantic comedy about a year in the lives of three couples from number one bestselling author Mike Gayle.

Meet Melissa and Paul: Five years after they split up he's still looking for love in all the wrong places while she wants the one thing she can't have: Paul.

Meet Chris and Vicky: They're so in tune they even brush their teeth in time with each other. So what is Chris doing risking it all for a meaningless affair?

Meet Cooper and Laura: He wants to settle down, she wants to take a grown-up gap year but can their relationship really survive a year apart?

Set across a year of leaving dos, birthday parties and anniversary celebrations, Life and Soul of the Party is a warm, funny and moving tale celebrating love, life and those special moments we've all spent in the kitchen at parties.

Life and Soul of the Party Reviews

Mike Gayle creates real, ordinary people with real ordinary lives who are so real and so believable that you mourn for them from the moment you finish reading. * Lisa Jewell *
Packed with drama, friendship, love and tragedy, this is a brilliant touching tale of what happens when real life catches up with us * Heat *
Moving and powerful * Daily Mirror *
What I love about Mike Gayle is the way he seamlessly blends humour and sensitivity - his books are always rip-roaringly funny, yet so humane too. * Freya North *
Gayle (rather bravely) often writes in the first person as a female character, but he hits the right notes, and the result is a warm and unforced comedy... Gayle's humour is human and he has a fine eye for the quiet pain of unrequited love. * Daily Telegraph *

GOR009013113
Life and Soul of the Party by Mike Gayle
Mike Gayle
Used - Like New
Paperback
Hodder & Stoughton General Division
2009-04-30
336
0340825448
9780340825440
N/A
Book picture is for illustrative purposes only, actual binding, cover or edition may vary.
This is a used book - there is no escaping the fact it has been read by someone else and it will show signs of wear and previous use. Overall we expect it to be in very good condition, but if you are not entirely satisfied please get in touch with us.