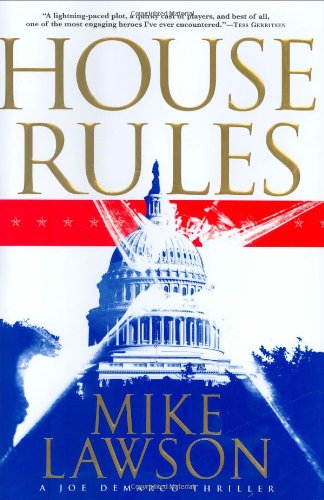 Mike Lawson's Joe DeMarco thrillers have drawn praise for their fine-tuned suspense, off-kilter characters, intricate plots, and revealing portrait of Washington, DC behind closed doors. In House Rules, a terrorist bombing of the Baltimore Harbor Tunnel is narrowly avoided. Then a private plane headed straight for the White House ignores warnings and is shot down. An atmosphere of fear and panic overruns the country, and when the junior senator from Virginia proposes to deport all noncitizen Muslims and run extensive background checks on all Muslim Americans, his bill gains surprising traction.

Speaker of the House John Mahoney is not pleased. He knows it is the kind of knee-jerk response people will come to regret, like Japanese internment camps, and he needs to find a way to kill the bill before it exposes a secret he wants to keep. So Mahoney calls his man DeMarco. An average guy who struggles with debt, divorce, and an unreasonable boss, DeMarco is an unlikely hero, in over his head, relying on old friends as he attempts to get to the bottom of the attacks in this riveting read, full of suspense, fascinating characters, humor, and timely political intrigue.

GOR002521563
House Rules by Mike Lawson
Mike Lawson
Used - Very Good
Hardback
Grove Press / Atlantic Monthly Press
2008-08-09
373
0871139839
9780871139832
N/A
Book picture is for illustrative purposes only, actual binding, cover or edition may vary.
This is a used book - there is no escaping the fact it has been read by someone else and it will show signs of wear and previous use. Overall we expect it to be in very good condition, but if you are not entirely satisfied please get in touch with us.