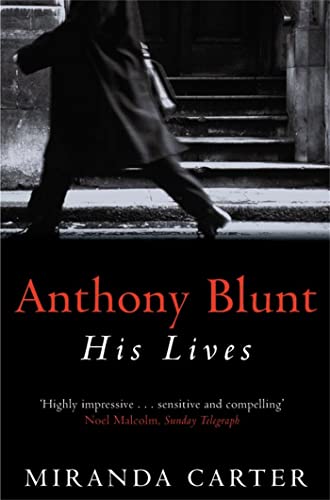 When Anthony Blunt died in 1983, he was a man about whom almost anything could be - and was - said. As Surveyor of the Queen's Pictures and Director of the Courtauld Institute, Blunt's position was assured until his exposure in 1979 left his reputation in tatters. Miranda Carter's brilliantly insightful biography gives us a vivid portrait of a human paradox. Blunt's totally discrete lives, with their permanent contradictions, serve to remind us that there is no one key to any human being's identity: we are all a series of conflicting selves.

Astonishingly good * Daily Telegraph *
Highly impressive... sensitive and compelling... Miranda Carter has written a richly informative biography which, in the end, does not fall into the trap of tout comprendre, c'est tout pardonner - not only because she is not seeking to pardon him, but also because there is something here that is still quite impossible to comprehend * Noel Malcolm, Sunday Telegraph *
A compelling biography... Miranda Carter's skill at scouring the different compartments of Blunt's life is deeply impressive * Julian Barnes, New Yorker *

Miranda Carter was educated at St. Paul's Girls' School and Exeter College, Oxford. She worked as a publisher and journalist before beginning research on her biography of Anthony Blunt in 1994. She lives in London with her husband and two sons. Anthony Blunt: His Lives (2001), her first book, won the Royal Society of Literature Award and the Orwell Prize, and was shortlisted for many other prizes, including the Guardian First Book Award and the Whitbread Biography Award. In the US it was chosen by the New York Times Book Review as one of the seven best books of 2002.

GOR001243626
Anthony Blunt: His Lives by Miranda Carter
Miranda Carter
Used - Very Good
Paperback
Pan Macmillan
2002-10-11
608
0330367668
9780330367660
Winner of The Orwell Prize 2002 (UK) Short-listed for Guardian First Book Award 2001 (UK) Short-listed for Whitbread Biography Award 2003 (UK) Short-listed for CWA Dagger for Non-Fiction 2002 (UK) Long-listed for BBC Four Samuel Johnson Prize 2002 (UK)
Book picture is for illustrative purposes only, actual binding, cover or edition may vary.
This is a used book - there is no escaping the fact it has been read by someone else and it will show signs of wear and previous use. Overall we expect it to be in very good condition, but if you are not entirely satisfied please get in touch with us.