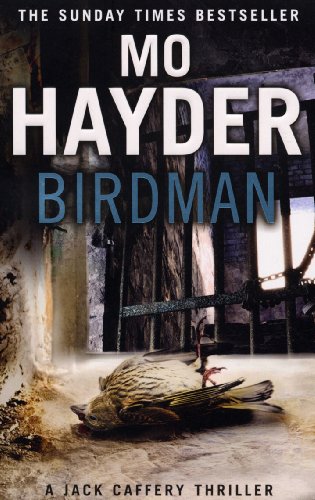 Detective Inspector Jack Caffery - young, driven, unshockable - is called to one of the most gruesome crime scenes he has ever seen.

Detective Inspector Jack Caffery - young, driven, unshockable - is called to one of the most gruesome crime scenes he has ever seen. Five young women have been ritualistically murdered and dumped on wasteland near the Dome. Subsequent post-mortems reveal a singular, horrific signature linking the victims.

Soon Caffery realises that he is on the trail of that most dangerous offender: a serial killer. Beset by animosity within the police force, haunted by the memory of a very personal death long ago, Caffery employs every weapon forensic science can offer to hunt him down.

Because he knows that it is only a matter of time before this sadistic killer strikes again ...

Not for the faint-hearted... what sets Birdman apart is Hayder's talent * Sunday Express *
A first-class shocker... a frightening mix of forensics, thrills, analytical police work and poetic images... a young writer in touch with her dark side and a major new talent * Guardian *
Wickedly constructed... Her cast of suspects is the most spooky since Dickens... The detail, if you can stomach it, is fascinating * Daily Telegraph *
Hayder's vibrant narrative and crunchy characterisation propel the book along to its denouement with fearsome velocity * The Times *

Mo Hayder has written some of the most terrifying crime thrillers you will ever read. Her first novel, Birdman, was hailed as a 'first-class shocker' by the Guardian and her follow-up, The Treatment was voted by the Times one of 'the top ten most scary thrillers ever written'. In 2012 Gone won the prestigious Edgars Best Novel award.

Mo left school at 15 and has worked as a barmaid, security guard, English teacher, and even a hostess in a Tokyo club. She has an MA in film making from the American University in Washington DC and an MA in creative writing from Bath Spa University. She now lives in England's West Country and is a full-time writer.

For more information on Mo Hayder and her books, see her website at www.mohayder.net

GOR001221499
Birdman: Jack Caffery series 1 by Mo Hayder
Mo Hayder
Jack Caffery
Used - Very Good
Paperback
Transworld Publishers Ltd
2008-11-08
400
055382046X
9780553820461
N/A
Book picture is for illustrative purposes only, actual binding, cover or edition may vary.
This is a used book - there is no escaping the fact it has been read by someone else and it will show signs of wear and previous use. Overall we expect it to be in very good condition, but if you are not entirely satisfied please get in touch with us.