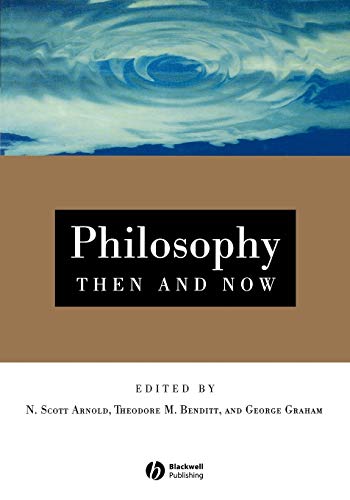 Philosophy Then and Now
by N. Scott Arnold

Used Price
$13.69
Free Shipping in the US
This introductory philosophy text features classic and contemporary readings and sections on the major ideas associated with a seminal figure from the history of philosophy. Key selections from the essential writings of that philosopher are included, as well as selections from contemporary figures.
Reviews:
Trustpilot
Very Good

Philosophy Then and Now Summary

Philosophy Then and Now: An Introductory Text with Readings by N. Scott Arnold

Philosophy Then and Now provides an innovative and engaging blend of introductory text with classic and contemporary readings.Each of the eight parts begins with an introductory section on the major ideas associated with a seminal figure from the history of philosophy. This is followed by key selections from the essential writings of that philosopher, as well as influential selections from contemporary figures. Key figures covered include: Socrates, Aquinas, Locke, Descartes, Mill, Nietzsche, Marx, and Sartre.By focusing on the core themes, issues and problems of philosophy, the volume motivates student interest in the subject, and represents a distinctive text for all introductory courses in philosophy.

Customer Reviews - Philosophy Then and Now

Philosophy Then and Now Reviews

"Philosophy Then and Now is a tasty blend of classic and contemporary philosophical essays on basic problems in philosophy. Each entree is preceded by a scrumptious appetizer: a substantial new essay to whet the students' philosophical palates." Hugh LaFollette, East Tennessee State University "Distinguished and gifted members of the Philosophy Department at the University of Alabama at Birmingham have put together a splendid introductory text. Not only are the best and most absorbing writings of the western tradition on philosophy aptly chosen, but the substantial introductions by each of these collegues broach the issues deftly and carry the discussion to the frontier of the subject. The result is more than an effective teaching tool, it is a distinctive approach to out philosophical tradition." Alex Rosenberg, University of Georgia "This is an outstanding new introductory philosophy text. Students will be drawn into the ongoing philosophical conversations and the historical material will give them much to talk about. Helpful discussion questions and suggestions for further reading are provided and the book is suitable for variety of introductory courses." Hugh Wilder, College of Charleston

N. Scott Arnold is Professor of Philosophy at the University of Alabama at Birmingham. He has been a visiting scholar at the Hoover Institution at Stanford University and at the Social Philosophy and Policy Center at Bowling Green State University in Ohio. He is the author of Marx's Radical Critique of Capitalist Society (1990) and The Philosophy and Economics of Market Socialism (1994).

Theodore M. Benditt has been Dean of the School of Arts and Humanities at the University of Alabama at Birmingham since 1984 and a member of its Philosophy Department since 1978. He is the author of Law as Rule and Principle: Problems of Legal Philosophy (1978) and Rights (1982).

George Graham is Professor of Philosophy and Psychology and Chair of the Department of Philosophy at the University of Alabama at Birmingham. He is the former editor of the journal "Behavior and Philosophy" and the author of Philosophy of Mind (Blackwell, 1993). He co-edited (with Hugh LaFollette) Person to Person (1989); and (with G. Lynn Stephens) Philosophical Psychopathology (1994); as well as (with William Bechtel) A Companion to Cognitive Science (Blackwell, 1998).

GOR001400587
Philosophy Then and Now: An Introductory Text with Readings by N. Scott Arnold
N. Scott Arnold
Used - Very Good
Paperback
John Wiley and Sons Ltd
1998-10-01
616
1557867429
9781557867421
N/A
Book picture is for illustrative purposes only, actual binding, cover or edition may vary.
This is a used book - there is no escaping the fact it has been read by someone else and it will show signs of wear and previous use. Overall we expect it to be in very good condition, but if you are not entirely satisfied please get in touch with us.