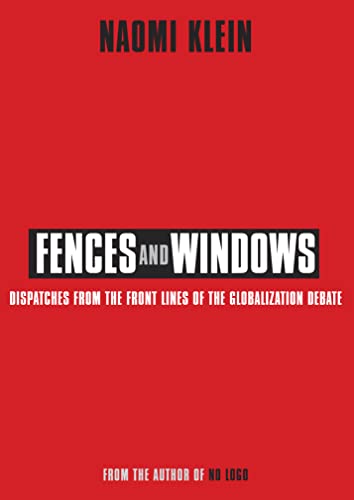 Fences and Windows
by Naomi Klein

The story of the rise of the movement that wanted accountable, improved globalization.

Fences and Windows: Dispatches from the Frontlines of the Globalization Debate by Naomi Klein

The story of the rise of the movement that wanted accountable, improved globalization.

For two years Naomi Klein wrote a weekly column for Canada's leading newspaper, the Globe & Mail (syndicated worldwide, in the Guardian in the UK). She has, by selecting, rewriting and rearranging these columns, prepared what amounts to a first-hand historical record of the gradual rise to prominence of the anti-global-corporatism movement, and of its most notable successes and failures. It has a truly international scope, covering everything from the Zapatistas' rebellion in Mexico to the Social Centres in Italy, from the biggest peaceful protest demos since the 1960s to the gassings and shootings at Genoa. Naomi analyses developments in local democracy, in law enforcement, in privatisation laws, in capital migrations, in union behaviour, in marketing, in summitry. She gets close to the suited summits - the WTO, the G8, the IMF, NAFTA. She looks at bioterrorism, pollution, hypocrisy, fear and confusion. It is a portrait, or rather the underlying negative, of the planet's torrid time between the Seattle summit and the world-changing events of 11 September 2001. It makes for dramatic, immediate, indispensable history writing, and reading.

Praise for `No Logo':

`A riveting, conscientious piece of journalism and a strident call to arms. Packed with enlightening statistics and extraordinary anecdotal evidence, "No Logo" is fluent, undogmatically alive to its contradictions and omissions and positively seethes with intelligent anger.' Observer

Born in Montreal in 1970, Naomi Klein is an award-winning journalist and author of the bestselling `No Logo', a book that has helped define a new generation of young activists. She lives in Toronto.

GOR001242293
Fences and Windows: Dispatches from the Frontlines of the Globalization Debate by Naomi Klein
Naomi Klein
Used - Very Good
Paperback
HarperCollins Publishers
2002-09-25
304
0007150474
9780007150472
N/A
Book picture is for illustrative purposes only, actual binding, cover or edition may vary.
This is a used book - there is no escaping the fact it has been read by someone else and it will show signs of wear and previous use. Overall we expect it to be in very good condition, but if you are not entirely satisfied please get in touch with us.