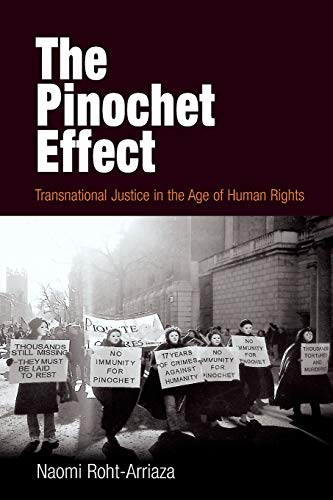 The Pinochet Effect
by Naomi Roht-Arriaza

What Pinochet's arrest has taught us about transnational justice and international jurisdiction.

The Pinochet Effect: Transnational Justice in the Age of Human Rights by Naomi Roht-Arriaza

The 1998 arrest of General Augusto Pinochet in London and subsequent extradition proceedings sent an electrifying wave through the international community. This legal precedent for bringing a former head of state to trial outside his home country signaled that neither the immunity of a former head of state nor legal amnesties at home could shield participants in the crimes of military governments. It also allowed victims of torture and crimes against humanity to hope that their tormentors might be brought to justice. In this meticulously researched volume, Naomi Roht-Arriaza examines the implications of the litigation against members of the Chilean and Argentine military governments and traces their effects through similar cases in Latin American and Europe.

Roht-Arriaza discusses the difficulties in bringing violators of human rights to justice at home, and considers the role of transitional justice in transnational prosecutions and investigations in the national courts of countries other than those where the crimes took place. She traces the roots of the landmark Pinochet case and follows its development and those of related cases, through Spain, the United Kingdom, elsewhere in Europe, and then through Chile, Argentina, Mexico, and the United States. She situates these transnational cases within the context of an emergent International Criminal Court, as well as the effectiveness of international law and of the lawyers, judges, and activists working together across continents to make a new legal paradigm a reality. Interviews and observations help to contextualize and dramatize these compelling cases.

These cases have tremendous ramifications for the prospect of universal jurisdiction and will continue to resonate for years to come. Roht-Arriaza's deft navigation of these complicated legal proceedings elucidates the paradigm shift underlying this prosecution as well as the traction gained by advocacy networks promoting universal jurisdiction in recent decades.

"Roht-Arriaza has brought together a great amount of information from both published and other sources. . . . The treatment is both historical and legal, and the multilayered approach produces many dividends."-American Journal of International Law

"A modern-day version of Hannah Arendt's classic Eichmann in Jerusalem. Although nonfiction, The Pinochet Effect reads like a novel, eloquently recounting the saga and consequences of one of the most important cases of our time."-Michael P. Scharf, coauthor of Slobodan Milosevic on Trial

"An electrifying account of Pinochet's extradition proceedings, as it played throughout the international community. . . . A 'must' read."-American Society of International Law Newsletter

"Skillfully combines, and draws lessons from, personal stories and legal and political analyses. . . . The book's main contribution is its skillful discussion of the transformation of the international legal system; the evolution of the concept of sovereignty; and the expansion, and later reduction, of the notion of universal jurisdiction."-Latin American Research Review

"Roht-Arriaza provides a carefully balanced presentation. . . . Her argument sheds light on the dynamics of the role of international law in the transitions to democratic rule, but it always acknowledges the limits of such universal standards across the board unless they find their enforcement at the domestic level."-Choice

Naomi Roht-Arriaza is Professor of Law at the University of California Hastings College of Law. She is the author of Impunity and Human Rights Violations in International Law and Practice.

The Beginning
2. The Adventures of Augusto Pinochet in the United Kingdom: A "Most Civilized Country"
3. The Investigations Come Home to Chile
4. Argentina: Truth and Consequences
5. The European Cases
6. Operation Condor Redux
7. The Legal Legacy of Pinochet: Universal Jurisdiction and Its Discontents
8. The Actors Behind the Pinochet Cases

CIN000074119
The Pinochet Effect: Transnational Justice in the Age of Human Rights by Naomi Roht-Arriaza
Naomi Roht-Arriaza
Pennsylvania Studies in Human Rights
Used - Very Good
Paperback
University of Pennsylvania Press
2006-08-18
272
0812219740
9780812219746
N/A
Book picture is for illustrative purposes only, actual binding, cover or edition may vary.
This is a used book - there is no escaping the fact it has been read by someone else and it will show signs of wear and previous use. Overall we expect it to be in very good condition, but if you are not entirely satisfied please get in touch with us.