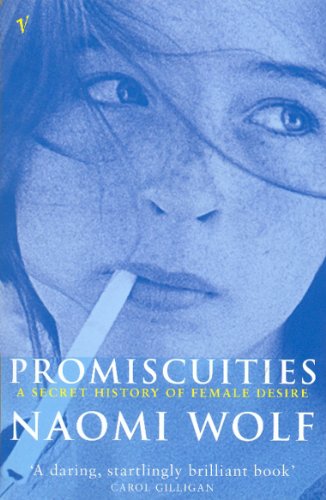 In Stock
$13.99
By following a group of four contemporary girls - including her younger self - as they come of age in the seventies, Wolf shows how our culture tries to shape and confine women's desire.
Very Good Good
Only 2 left

Promiscuities: An Opinionated History of Female Desire by Naomi Wolf

By following a group of four contemporary girls - including her younger self - as they come of age in the seventies, Wolf shows how our culture tries to shape and confine women's desire. Embarking on a voyage of discovery, she illustrates how flawed and prescribed are the notions of what women want, and how these change through the ages - from Taoist techniques for giving women pleasure, to Victorian repression, and the so-called liberated nineties. Drawing on scholarly texts, secret diaries, real life and fantasy, she demonstrates that female sexuality is wilder, more demanding and more powerful than our culture dares to accept.

"Her book is a searing and thoroughly fascinating exploration of the complex wildlife of female sexuality and desire." * New York Times *
"At last, a new generation of women writers is addressing the powerful issues of female sexuality. I gulped this wonderful book down in one sitting, like a novel. Brava Naomi Wolf for your courage, your intelligence, your lucid prose." * Erica Jong *
"Refreshing... Highly evocative... Wolf does two important things very well: reminding readers her own age what it felt like to be a teenage girl, and providing a crash course on the wildly varying cultural meanings attached to female sexuality throughout history" * The Ottawa Citizen *
"Naomi Wolf [is] the best writer about women and sexuality that we have" * Toronto Sun *
"Fascinating... Wolf celebrates the ancient concept, heavily suppressed in the 20th century, that women are the more carnal sex" * Vancouver Courier *

Naomi Wolf was born in 1962 in San Francisco, where she grew up. She studied at Yale before becoming a Rhodes Scholar at New College, Oxford, and working in Edinburgh. She was catapulted to success in 1990 with the publication of her first book, The Beauty Myth, which became an international bestseller, published in fourteen countries. This was followed by another best-selling book, Fire with Fire, about women's relationship to power. She writes on women's issues and lectures all over the world.

GOR001242500
Promiscuities: An Opinionated History of Female Desire by Naomi Wolf
Naomi Wolf
Used - Very Good
Paperback
Vintage Publishing
1998-03-05
288
0099205912
9780099205913
N/A
Book picture is for illustrative purposes only, actual binding, cover or edition may vary.
This is a used book - there is no escaping the fact it has been read by someone else and it will show signs of wear and previous use. Overall we expect it to be in very good condition, but if you are not entirely satisfied please get in touch with us.