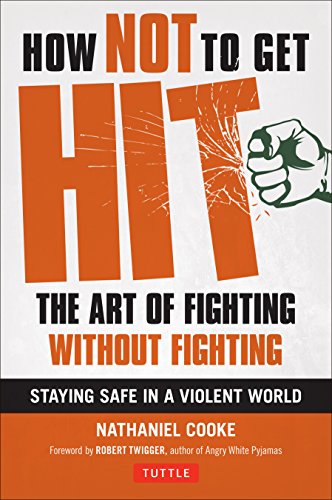 How Not to Get Hit
by Nathaniel Cooke

How Not to Get Hit Summary

How Not to Get Hit: The Art of Fighting Without Fighting by Nathaniel Cooke

The average person isn't looking to be in a situation where fists are going to fly, but many of us have found ourselves there anyway. At that moment, it's probably too late to do anything about it. But how do we change circumstances, so those situations don't happen?

How Not to Get Hit is a book on personal safety for people who don't want to learn to fight, but do want to learn how to avoid those situations where a fight is likely to develop.

Told in a lighthearted, irreverent style, How Not to Get Hit takes you on a journey through the funny side of violence, its roots in our evolutionary past and where it fits into modern society. Self-defense isn't a series of techniques or moves; it's an attitude, a strategy and a life skill. This martial arts philosophy book will give you an understanding of why people want to use violence and how to manage situations in order to create a better outcome.

Customer Reviews - How Not to Get Hit

How Not to Get Hit Reviews

"Nathaniel Cooke has clearly thought a great deal about the subject and distilled its essence in a way that is wholly admirable." --Robert Twigger, author of Angry White Pyjamas
"From the very first this is a welcoming read. But don't take my word for it. Buy the book and enjoy it for yourself." --50/50 Self Defense
"It was valuable to hear about actual situations in which these tactics were used to diffuse or end a potential altercation. This renewed my motivation to learn them and gave me confidence in their effectiveness." --KarateForums.com
"Nathaniel Cooke does a terrific job of making statistics mean something in How Not To Get Hit." --Kris Wilder, Co-author, The Little Black Book of Violence: What Every Young Man Needs to Know About Fighting

Nathaniel Cooke holds a 2nd-degree black belt in Bujinkan Taijutsu and is an instructor at the Budo Warrior Schools.

Robert Twigger is a British author and explorer who has been described as "a 19th-century adventurer trapped in the body of a 21st Century writer." He attended Oxford University and later spent a year training in Martial Arts with the Tokyo Riot Police. He has won the Newdigate prize for poetry, the Somerset Maugham award for literature and the William Hill Sports Book of the Year award. He currently lives in Cairo, Egypt.

GOR010329694
How Not to Get Hit: The Art of Fighting Without Fighting by Nathaniel Cooke
Nathaniel Cooke
Used - Very Good
Paperback
Tuttle Publishing
2017-07-18
192
0804848815
9780804848817
N/A
Book picture is for illustrative purposes only, actual binding, cover or edition may vary.
This is a used book - there is no escaping the fact it has been read by someone else and it will show signs of wear and previous use. Overall we expect it to be in very good condition, but if you are not entirely satisfied please get in touch with us.