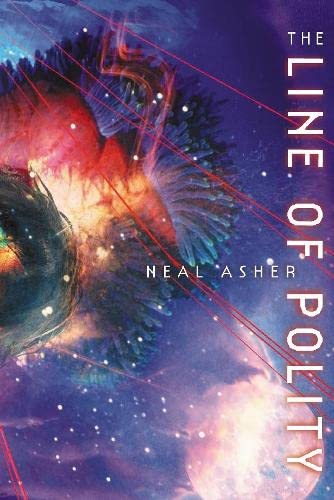 The Line of Polity
by Neal Asher

In Stock
$9.39
Full-scale action SF by one of Britain's most popular new writers.
Very Good Good
Only 2 left

The Line of Polity Summary

The Line of Polity by Neal Asher

Outlink station Miranda has been destroyed by a nanomycelium, and the very nature of this sabotage suggests that the alien bioconstruct Dragon - a creature as untrustworthy as it is gigantic - is somehow involved. Sent out on a titanic Polity dreadnought, the Occam Razor, agent Cormac must investigate the disaster.

Meanwhile, on the remote planet Masada, the long-term rebellion can never rise above-ground, as the slave population is subjugated by orbital laser arrays controlled by the Theocracy in their cylinder worlds, and by the fact that they cannot safely leave their labour compounds. For the wilderness of Masada lacks breathable air ... and out there roam monstrous predators called hooders and siluroynes, not to mention the weird and terrible gabbleducks.

GOR001241169
The Line of Polity by Neal Asher
Neal Asher
Used - Very Good
Paperback
Pan Macmillan
2004-03-19
672
0330484354
9780330484350
N/A
Book picture is for illustrative purposes only, actual binding, cover or edition may vary.
This is a used book - there is no escaping the fact it has been read by someone else and it will show signs of wear and previous use. Overall we expect it to be in very good condition, but if you are not entirely satisfied please get in touch with us.