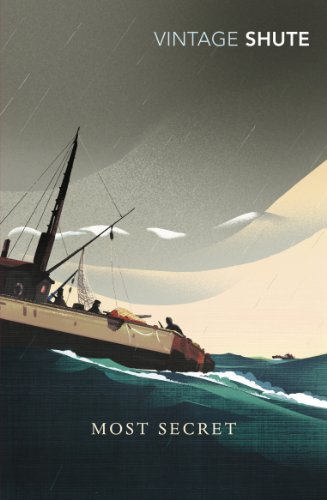 Most Secret
by Nevil Shute

Used Price
$13.39
Free Shipping in the US
In their trusty fishing boat Genevieve, armed with a flame thrower and limited ammunition, a small group of officers and men take a stand against the might of the German army after the fall of France in World War II.
Reviews:
Trustpilot
Very Good

Most Secret by Nevil Shute

In their trusty fishing boat Genevieve, armed with a flame thrower and limited ammunition, a small group of officers and men take a stand against the might of the German army after the fall of France in World War II. This is classic Shute: at once a thrilling adventure that will keep you on the edge of your seat, and a heartbreaking tale of the ravages of war.

A magnificent thrill; it is also a tale of character, for every member of the little ship's company is worth meeting. A book that should not be missed * Daily Telegraph *
Mr Shute's style is ideal for this kind of book. He revels in incident and he draws his people with loving care. Here, he's reminiscent of H. E. Bates at his best; that same ability to make you passionately interested in anything he's interested in, and to make the most outlandish happening seem credible his characters are so real
No other writer has brought to fiction of this type quite the same lively sympathy and warmth of imagination or left so engaging an impression of truthfulness....Mr Shute always has good things to offer...the power to convey the springs of heroic conduct in the lightest and least assuming of tones * Times Literary Supplement *
Based around a group aboard a converted trawler in 1942, this is a grand tale of sacrifice and courage and superbly structured * Express *

GOR001532078
Most Secret by Nevil Shute
Nevil Shute
Used - Very Good
Paperback
Vintage Publishing
2009-09-03
352
0099530082
9780099530084
N/A
Book picture is for illustrative purposes only, actual binding, cover or edition may vary.
This is a used book - there is no escaping the fact it has been read by someone else and it will show signs of wear and previous use. Overall we expect it to be in very good condition, but if you are not entirely satisfied please get in touch with us.