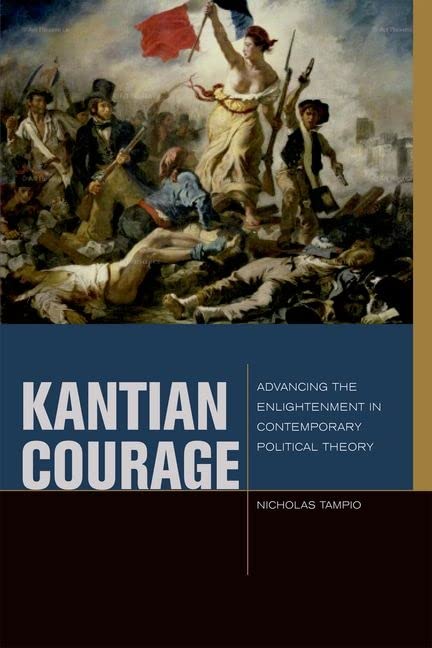 Used Price
$5.99
Free Shipping in the US
Advancing the Enlightenment draws upon John Rawls, Gilles Deleuze, and Tariq Ramadan to present a vision for progressive politics. Rather than defend Kant's ideas, heirs of the Enlightenment should create concepts such as overlapping consensus, rhizome, and space of testimony to facilitate alliances across religious and philosophical differences.
Reviews:
Trustpilot
Very Good

How may progressive political theorists advance the Enlightenment after Darwin shifted the conversation about human nature in the 19th century, the Holocaust displayed barbarity at the historical center of the Enlightenment, and 9/11 showed the need to modify the ideals and strategies of the Enlightenment? Kantian Courage considers how several figures in contemporary political theory-including John Rawls, Gilles Deleuze, and Tariq Ramadan-do just this as they continue Immanuel Kant's legacy.

Rather than advocate specific Kantian ideas, the book contends that political progressives should embody Kantian courage-a critical and creative disposition to invent new political theories to address the problems of the age. It illuminates Kant's legacy in contemporary intellectual debates; constructs a dialogue among Anglo-American, Continental, and Islamic political theorists; and shows how progressives may forge alliances across political and religious differences by inventing concepts such as the overlapping consensus, the rhizome, and the space of testimony. The book will interest students of the Enlightenment, contemporary political theorists and philosophers, and a general audience concerned about the future of the relationship between Islam and the West.

Nicholas Tampio's Kantian Courage is a stellar example of what is best in the field of contemporary political theory. In this effort to balance the new against the old, Tampio's work displays an exemplary degree of openmindedness, intellectual honesty, scholarly care, and attentiveness to the complex difficulties that we as political thinkers of the twenty-first century find ourselves in. * -The Review of Politics *
Nicholas Tampio's Kantian Courage is a breath of fresh air in a field too often marked by pious exegeses of the canonical Enlightenment thinkers or bitter rejections of our Enlightenment heritage. One of the great virtues of Tampio's book is its ambitious attempt to make the Enlightenment relevant for modern times, to have it speak to contemporary crises and policy dilemmas. * -Perspectives on Politics *
A bold and exciting book, born out of the conviction that we need a new Enlightenment for the twenty-first century. -- -Paul Patton * University of New South Wales *
A wonderfully clear, appropriately comprehensive, and original work of scholarship. Kantian Courage labors to discover in Kant's thought intellectual resources for reconstituting an Enlightenment ethos in contemporary political theory and, presumably, in the late modern cultural landscape to the extent that political theory today could exercise such an influence. -- -Morton Schoolman * University of Albany, SUNY *

CIN000406273
Kantian Courage: Advancing the Enlightenment in Contemporary Political Theory by Nicholas Tampio
Nicholas Tampio
Just Ideas
Used - Very Good
Paperback
Fordham University Press
2012-09-01
256
0823245012
9780823245017
N/A
Book picture is for illustrative purposes only, actual binding, cover or edition may vary.
This is a used book - there is no escaping the fact it has been read by someone else and it will show signs of wear and previous use. Overall we expect it to be in very good condition, but if you are not entirely satisfied please get in touch with us.