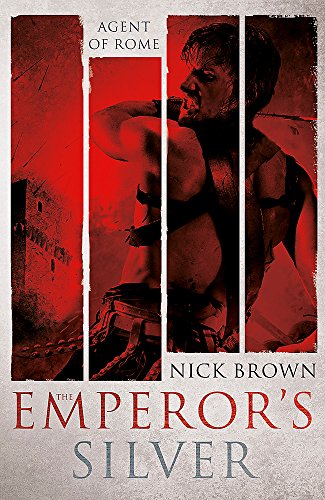 The Emperor's Silver
by Nick Brown

Used Price
$23.99
Free Shipping in the US
Cassius Cobulo, agent of Imperial Rome, returns in his most incredible adventure yet.
Reviews:
Trustpilot
Very Good

The Emperor's Silver: Agent of Rome 5 by Nick Brown

Still recovering from his previous assignment in Arabia, imperial agent Cassius Corbulo has been spending most of his time and money on women and wine. Unfortunately for him, word of his achievements has reached the emperor Aurelian's deputy and he is sent north, tasked with smashing a counterfeiting gang.

Cassius tracks the criminals to the city of Berytus, where his investigations are hampered by civil unrest and uncooperative officials, not to mention the personal problems of his servant Simo and bodyguard Indavara. Despite this - and intense pressure from his superiors - the young officer eventually closes in on the gang.

But his enemies will do anything to protect their profits, and Cassius and Indavara soon find themselves fighting not only for the emperor, but for their very survival.

Praise for AGENT OF ROME: THE IMPERIAL BANNER:

'The Imperial Banner is Roman adventure at its best... brutal action leavened by a cynical brand of military humour, history, mystery, romance and an almost tangible sense of cohesion and camaraderie amongst Cassius and his cohorts. It's a formula that works well in so Brown's capable hands... Cassius's next assignment can't come too soon!'

* Lancashire Evening Post *
If you love Scarrow, adore Iggulden and of course admire Scott, then make sure you add Brown to your list. Great stuff. * Falcata Times *

Praise for AGENT OF ROME: THE SIEGE:

* Manda Scott *
Once the action kicks off you won't be able to put it down. * Anthony Riches, author of the Empire series *
Perfect pace, vivid combat sequences and superb characterisation * Lancashire Evening Post *
Brown promises to be one of the most exciting sword-wielding writers in an ever-popular arena. * The Oxford Times *
A thrilling and fascinating coming-of-age adventure * Book Gazette *
Nick Brown has the craft of storytelling at his fingertips ... The Siege is a fast-paced and satisfying read * Russell Whitfield, author of Gladiatrix *
Brown has given this Roman military/adventure story a great twist in having Cassius hail from the secret service ranks ...The Siege is also a character study and offers a rare glimpse into 3rd century Rome and her occupation of Syria. * Historical Novels Review *

Nick Brown grew up in Norfolk and later studied history at the University of Sussex. In 2000 he embarked on a PCGE course at the University of Exeter and began a career as a teacher of English and humanities. Having taught in England and Poland he now lives in his home town, Norwich. The Emperor's Silver is the fifth volume of the Agent of Rome series.

GOR007189759
The Emperor's Silver: Agent of Rome 5 by Nick Brown
Nick Brown
Used - Very Good
Hardback
Hodder & Stoughton
2015-06-01
416
1444779141
9781444779141
N/A
Book picture is for illustrative purposes only, actual binding, cover or edition may vary.
This is a used book - there is no escaping the fact it has been read by someone else and it will show signs of wear and previous use. Overall we expect it to be in very good condition, but if you are not entirely satisfied please get in touch with us.