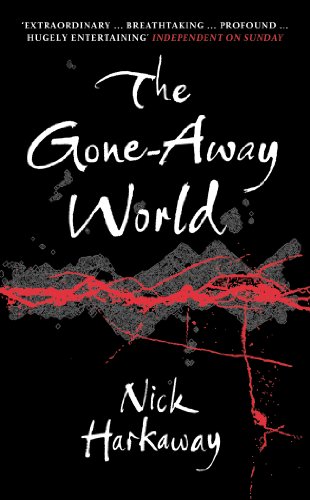 The Gone-Away World
by Nick Harkaway

In Stock
$9.69
Gonzo Lubitsch, professional hero and troubleshooter, is hired to put it out - but there's more to the fire, and the Pipe itself, than meets the eye. But it also the story of a world, not unlike our own, in desperate need of heroes - however unlikely they may seem.
Like New Very Good Good
Only 1 left

The Gone-Away World by Nick Harkaway

The Jorgmund Pipe is the backbone of the world, and it's on fire. Gonzo Lubitsch, professional hero and troubleshooter, is hired to put it out - but there's more to the fire, and the Pipe itself, than meets the eye. The job will take Gonzo and his best friend, our narrator, back to their own beginnings and into the dark heart of the Jorgmund Company itself. Equal parts raucous adventure, comic odyssey and Romantic Epic, The Gone-Away World is a story of - among other things - love and loss; of ninjas, pirates, politics; of curious heroism in strange and dangerous places; and of a friendship stretched beyond its limits. But it also the story of a world, not unlike our own, in desperate need of heroes - however unlikely they may seem.

"Its scope and ambition are extraordinary, its execution is often breathtaking, and its style is by turns hilarious, outrageous, devastating, hip and profound ... Hugely entertaining" * Independent on Sunday *
"Breathtakingly ambitious ... A bubbling cosmic stew of a book, written with such exuberant imagination that you are left breathless by its sheer ingenuity" * Observer *
"[A] post-apocalyptic triumph ... Immensely rewarding ... Genuinely terrifying" * The Times *
"A stunning debut" * Scotland on Sunday *
"Exuberant...Wildly inventive" -- Michael Gove * The Times *

Nick Harkaway is the author of The Gone-Away World and Angelmaker, and of an even better and more exciting novel whose name will probably end up being Tigerman, or possibly Man, Island, Boy. Contrary to what you may have heard, the title really is the hard part. When he's not writing, he spends his time being the husband of a brilliant lawyer and the dad of two small children who are secretly bent on world domination. He likes Italian red wine and lives in a bit of London where the taxis still have a horse at the pointy end.

GOR010606807
The Gone-Away World by Nick Harkaway
Nick Harkaway
Used - Like New
Paperback
Cornerstone
2009-01-29
592
0099519976
9780099519973
N/A
Book picture is for illustrative purposes only, actual binding, cover or edition may vary.
The book has been read, but looks new. The book cover has no visible wear, and the dust jacket is included if applicable. No missing or damaged pages, no tears, possible very minimal creasing, no underlining or highlighting of text, and no writing in the margins.