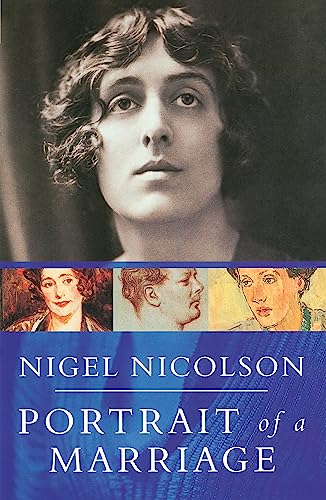 Portrait Of A Marriage
by Nigel Nicolson

Used Price
$9,39
Free Shipping in the US
The classic story of the relationship between Vita Sackville-West and Harold Nicolson, and a unique portrait of the Bloomsbury Group.
Reviews:
Trustpilot
Very Good Good

Portrait Of A Marriage Summary

Portrait Of A Marriage: Vita Sackville-West and Harold Nicolson by Nigel Nicolson

The classic story of the relationship between Vita Sackville-West and Harold Nicolson, and a unique portrait of the Bloomsbury Group.

The marriage was that between the two writers, Vita Sackville-West and Harold Nicolson and the portrait is drawn partly by Vita herself in an autobiography which she left behind at her death in 1962 and partly by her son, Nigel.

It was one of the happiest and strangest marriages there has ever been. Both Vita and Harold were always in love with other people and each gave the other full liberty 'without enquiry or reproach', knowing that their love for each other would be unaffected and even strengthened by the crises which it survived. This account of their love story is now a modern classic.

Customer Reviews - Portrait Of A Marriage

Portrait Of A Marriage Reviews

A brilliantly structured account of the dramas, infidelities and deep emotional attachment that went to construct the partnership of Harold Nicolson and Vita Sackville-West -- Michael de-la-Noy * Guardian *
One of the most absorbing stories, built around two very remarkable people, ever to stray from Gothic fiction into real life * Times Literary Supplement *
Portrait of a Marriage is as close to a cry from the heart as anybody writing English in our time has come, and it is a cry that, once heard, is not likely ever to be forgotten ... Unexpected and astonishing -- Brendan Gill * The New Yorker *
The charm of this book lies in the elegance of its narration, the taste with which their son has managed to convey the real, enduring quality of his parents' love for each other -- Doris Grumbach * New Republic *
Nigel's insightful Portrait of a Marriage shines a light on a fascinating couple * Literary Ladies Guide *
An intimate and controversial account of his bisexual parents' open relationship -- Jennifer Conlin * New York Times *

Nigel Nicolson, the younger son of Harold Nicolson and Vita Sackville-West, was a publisher, a Member of Parliament, an editor (including six volumes of Virginia Woolf's letters and three of his father's diaries) and the author of many books on history, politics, architecture and literature. He lived at the family home, Sissinghurst Castle in Kent, now a property of the National Trust, until his death in 2004.

GOR001291621
Portrait Of A Marriage: Vita Sackville-West and Harold Nicolson by Nigel Nicolson
Nigel Nicolson
Used - Very Good
Paperback
Orion Publishing Co
1993-01-22
256
1857990609
9781857990607
N/A
Book picture is for illustrative purposes only, actual binding, cover or edition may vary.
This is a used book - there is no escaping the fact it has been read by someone else and it will show signs of wear and previous use. Overall we expect it to be in very good condition, but if you are not entirely satisfied please get in touch with us.