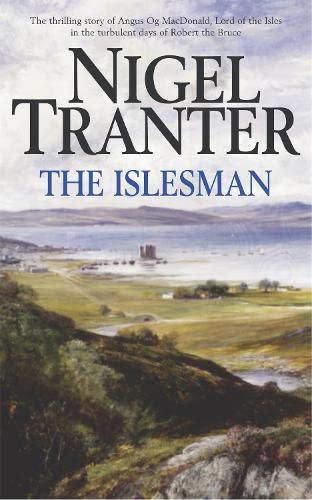 The Islesman
by Nigel Tranter

Used Price
$31.99
Free Shipping in the US
The thrilling story of Angus Og MacDonald, Lord of the Isles in the turbulent days of Robert the Bruce.
Reviews:
Trustpilot
Very Good Good

The Islesman by Nigel Tranter

This is the thrilling story of Angus Og MacDonald, Lord of the Isles, during the turbulent days of Robert the Bruce.

The grandson of the great Angus Mor, direct descendant and successor of Somerled himself, the semi-independent prince of the Hebrides and much of the West Highland mainland, Angus was a worthy representative of a notable line, living in dramatic and exciting times for Scotland and England, for Ulster, Man and Ireland.

He took his part in it all, an active supporter of Robert the Bruce, chief of chiefs. He was a man who sought peace and prosperity for his so scattered people, encouraging trade, seeking to heal the feuding propensities of the clans, allying the Isles with Orkney and Shetland and Norway; travelling as far as the Baltic. He was also a man of humble mind, and a proud husband and father.

'One of Scotland's most prolific and respected writers' Times

One of Scotland's leading historical novelists * The Sunday Times *
Mr Tranter works on a broad canvas; nobody does it better * Daily Telegraph *
Nigel Tranter captures the spirit of the times and writes with an absorbing attention to detail * Yorkshire Evening Post *
He has a burning respect for the spirit of history and deploys his characters with mastery * Observer *

One of Scotland's best-loved authors, Nigel Tranter wrote over ninety novels on Scottish history. He died at the age of ninety on 9 January 2000.

GOR001554574
The Islesman by Nigel Tranter
Nigel Tranter
Used - Very Good
Paperback
Hodder & Stoughton General Division
2003-06-09
400
0340770198
9780340770191
N/A
Book picture is for illustrative purposes only, actual binding, cover or edition may vary.
This is a used book - there is no escaping the fact it has been read by someone else and it will show signs of wear and previous use. Overall we expect it to be in very good condition, but if you are not entirely satisfied please get in touch with us.