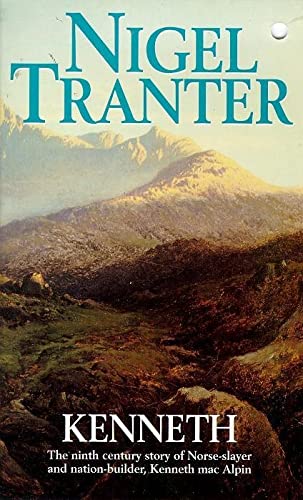 Used Price
$14.69
Free Shipping in the US
The story of Kenneth Mac Alpin, the 9th-century warrior hero who strove to bring his people together to stand against their enemies, and in doing so fathered a nation
Reviews:
Trustpilot
Very Good Good

Norse-Slayer and nationbuilder, Kenneth, son of Alpin mac Eochaidh, King of Galloway, was the visionary who brought together the ancient kingdoms of Alba, Dalriada, Strathclyde and Galloway to create the country of Scotland in the ninth century.
Yet his vision was wider still. He dreamed of a great coming together of all the Celtic people, Scots, Irish, Welsh, Cornish and Manx, united against the Norse and the Anglo-Saxon invaders.
Fighting not only his country's enemies but also the fractious, obstinate wilfulness of his own people, his legacy was a nation, with it's own patron saint, the apostle Andrew, that would edure from the ninth century to the present day.
'Through his imaginative dialogue, he provides a voice for Scotland's heroes' Scotland on Sunday

One of Scotland's best-loved authors, Nigel Tranter wrote over ninety novels on Scottish history. He died at the age of ninety on 9 January 2000.

GOR001302168
Kenneth by Nigel Tranter
Nigel Tranter
Used - Very Good
Paperback
Hodder & Stoughton General Division
1992-04-01
356
0340566388
9780340566381
N/A
Book picture is for illustrative purposes only, actual binding, cover or edition may vary.
This is a used book - there is no escaping the fact it has been read by someone else and it will show signs of wear and previous use. Overall we expect it to be in very good condition, but if you are not entirely satisfied please get in touch with us.