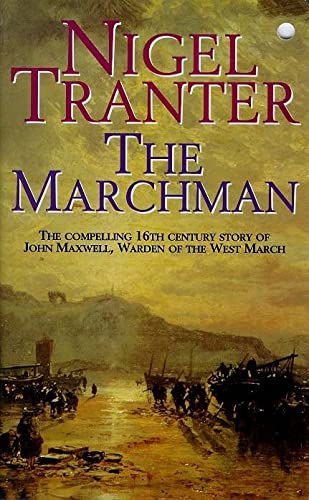 Used Price
$8.99
Free Shipping in the US

This is the compelling 16th-century story of John Maxwell, Warden of the West March in the days of Mary Queen of Scots and Elizabeth I of England.

During the 16th century, the Borderland between Scotland and England was something of a world apart, with its own strange laws, beliefs and customs.

Young John Maxwell, Warden of the West March, did his best to control a motley crew of dalesmen and mosstroopers from Liddesdale, Eskdale and Dryfesdale among others, and keep some sort of balance with the unruly West March English.

As the turbulent reign of King Henry VIII gave way to the rule of Elizabeth Tudor, John Maxwell - a loyal supporter of Mary, Queen of Scots - inevitably found himself drawn into the wider sphere of the kingdom's affairs.

How he fared with Mary's suitors, courtiers and enemies, and his courtship of the beautiful Agnes Herries, forms the fascinating subject of Nigel Tranter's captivating novel.

GOR010611293
Marchman by Nigel Tranter
Nigel Tranter
Used - Like New
Paperback
Hodder & Stoughton General Division
1997-12-04
374
0340659955
9780340659953
N/A
Book picture is for illustrative purposes only, actual binding, cover or edition may vary.
The book has been read, but looks new. The book cover has no visible wear, and the dust jacket is included if applicable. No missing or damaged pages, no tears, possible very minimal creasing, no underlining or highlighting of text, and no writing in the margins.