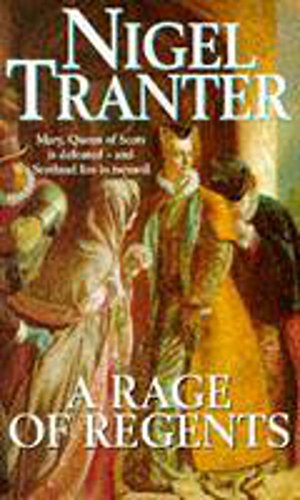 A Rage of Regents
by Nigel Tranter

Used Price
$8.39
Free Shipping in the US
Mary, Queen of Scots is defeated and Scotland lies in turmoil. An ordinary man, John Carmichael, is caught up in extraordinary circumstances and forced into a world of treachery and intrigue.
Reviews:
Trustpilot
Very Good Good

A Rage of Regents Summary

A Rage of Regents by Nigel Tranter

In 1568, the defeat of Mary, Queen of Scots at the Battle of Langside and her subsequent flight to England left Scotland a troubled nation.

Mary's infant son was crowned James VI, with her illegitimate half-brother, the earl of Moray, as Regent. The population remained bitterly divided as Moray and the Protestant Lords began to wreak their terrible vengeance on supporters of the losing side.

Having fought for the Queen at the battle, the Carmichaels of Lanarkshire were in a precarious position to say the least. Poor nineteen-year-old John Carmichael, Younger of that Ilk, whose sole ambitions were land-improvement, organising fishing and raising a family, was to become deeply entangled in the murky world of Scots regency government, eventually finding himself in great danger.

Customer Reviews - A Rage of Regents

A Rage of Regents Reviews

He has an amazingly broad grip of Scottish history * Daily Telegraph *
One of Scotland's most prolific and respected writers * The Times *
An accomplished writer of compelling and unforgettable historical novels * She magazine *
Through his imaginative dialogue, he provides a voice for Scotland's heroes * Scotland on Sunday *
Tranter's popularity lies in his knack of making historical events immediate and exciting * Historical Novels Review *
He treats history with respect * Financial Times *

GOR001373289
A Rage of Regents by Nigel Tranter
Nigel Tranter
Used - Very Good
Paperback
Hodder & Stoughton General Division
1996-11-07
410
0340659971
9780340659977
N/A
Book picture is for illustrative purposes only, actual binding, cover or edition may vary.
This is a used book - there is no escaping the fact it has been read by someone else and it will show signs of wear and previous use. Overall we expect it to be in very good condition, but if you are not entirely satisfied please get in touch with us.