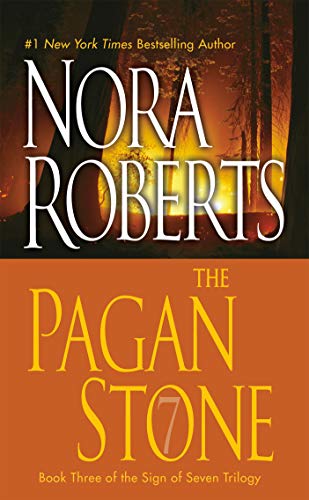 The Pagan Stone
by Nora Roberts

In Stock
$8.39
Following "Blood Brothers" and "The Hollow" comes the stunning conclusion to Roberts's electrifying Sign of the Seven trilogy, in which three men and three women join forces--and hearts--to battle the ultimate evil at the Pagan Stone. Original.
Like New Very Good Good
Only 1 left

The Pagan Stone by Nora Roberts

Years ago, after their blood brother ritual, Gage, Fox, and Caleb each emerged from the woods with a piece of bloodstone. Now, it will become their weapon in the final fight against the demon they awakened. Winner take all...

Shared nightmares, visions of blood and fire, and random violence begin to plague the longtime friends and the women bound to them by fate. None of them can ignore the fact that, this year, the demon has grown stronger--feeding off of the terror it creates. But now, the three pieces of the bloodstone have been fused back together. If only they could figure out how to use it.

A gambling man like Gage has no trouble betting on his crew to find a way. And though he and Cybil share the gift of seeing the future, that's all they share. But Gage knows that a woman like Cybil--with her brains and strength and devastating beauty--can only bring him luck. Good or bad has yet to be determined--and could mean the difference between absolute destruction or an end to Hawkins Hollow's nightmare...

Praise for Nora Roberts and The Pagan Stone

"Although the odds are against them, this band of friends and lovers has strengthened and grown over the course of this series...Terror, blood, fire and death ensure that this story ends with a world-class bang!"--RT Book Reviews

GOR010820947
The Pagan Stone by Nora Roberts
Nora Roberts
Sign of Seven Trilogy (Jove Books)
Used - Like New
Paperback
Penguin Putnam Inc
2008-12-01
322
0515144665
9780515144666
N/A
Book picture is for illustrative purposes only, actual binding, cover or edition may vary.
The book has been read, but looks new. The book cover has no visible wear, and the dust jacket is included if applicable. No missing or damaged pages, no tears, possible very minimal creasing, no underlining or highlighting of text, and no writing in the margins.