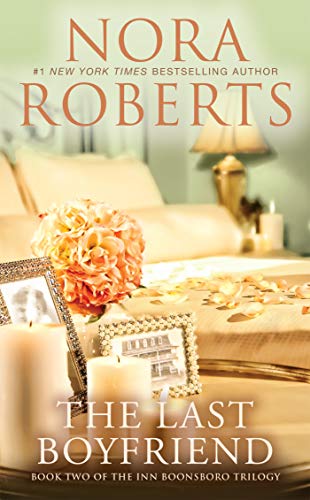 The Last Boyfriend
by Nora Roberts

The Last Boyfriend by Nora Roberts

#1 New York Times bestselling author Nora Roberts presents the story of a shared past, a fresh start, and a lifetime of love in the second novel in the Inn BoonsBoro Trilogy.

Owen is the organizer of the Montgomery clan, running the family's construction business with an iron fist--and an even less flexible spreadsheet. And though his brothers bust on his compulsive list-making, the Inn BoonsBoro is about to open right on schedule. The only thing Owen didn't plan for was Avery McTavish...

Avery's popular pizza place is right across the street from the inn, giving her a first-hand look at its amazing renovation--and a newfound appreciation for Owen. Since he was her first boyfriend when they were kids, Owen has never been far from Avery's thoughts. But the attraction she's feeling for him now is far from innocent.

As Avery and Owen cautiously take their relationship to another level, the opening of the inn gives the whole town of Boonsboro a reason to celebrate. But Owen's hard work has only begun. Getting Avery to let down her guard is going to take longer than he expected--and so will getting her to realize that her first boyfriend is going to be her last...

"[Roberts] writes a great story with likeable characters so warm and real--nobody does it better."--New York Journal of Books

"Roberts opens her heart and invites the die-hard romantics to stick around and snuggle with this poignant tale about trust, commitment, and optimism."--USA Today

"No one writes relationships as well as Ms. Roberts, with the subtleties and quirkiness of the give-and-take of friendship and romance."--Fresh Fiction

CIN000226950
The Last Boyfriend by Nora Roberts
Nora Roberts
Inn Boonsboro Trilogy
Used - Very Good
Paperback
Penguin Putnam Inc
2014-06-30
306
0515151483
9780515151480
N/A
Book picture is for illustrative purposes only, actual binding, cover or edition may vary.
This is a used book - there is no escaping the fact it has been read by someone else and it will show signs of wear and previous use. Overall we expect it to be in very good condition, but if you are not entirely satisfied please get in touch with us.