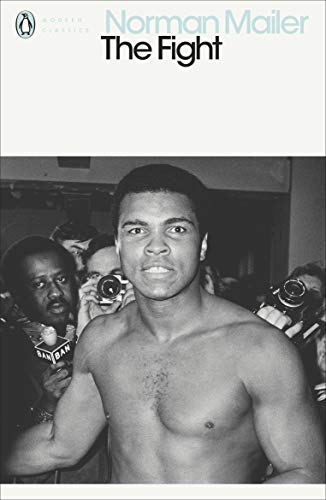 The Fight
by Norman Mailer

In Stock
$10.69
Muhammad Ali met George Foreman in the ring. Foreman's genius employed silence, serenity and cunning. He had never been defeated. His hands were his instrument, and 'he kept them in his pockets the way a hunter lays his rifle back into its velvet case'. This book focuses on the 1975 World Heavyweight Boxing Championship in Kinshasa, Zaire.
Very Good Good
15 in stock

The Fight by Norman Mailer

From one of the major innovators of New Journalism, Norman Mailer's The Fight is the real-life story of a clash between two of the world's greatest boxers, both in and out of the ring, published in Penguin Modern Classics.

Norman Mailer's The Fight focuses on the 1975 World Heavyweight Boxing Championship in Kinshasa, Zaire. Muhammad Ali met George Foreman in the ring. Foreman's genius employed silence, serenity and cunning. He had never been defeated. His hands were his instrument, and 'he kept them in his pockets the way a hunter lays his rifle back into its velvet case'. Together the two men made boxing history in an explosive meeting of two great minds, two iron wills and monumental egos.

Norman Mailer (1923-2007) was born in Long Branch, New Jersey, and attended Harvard University at the age of sixteen. He majored in engineering, but it was while he was at university that he became interested in writing. After graduating he served during the war in the Philippines with the Twelfth Armoured Cavalry regiment from Texas; those were the years that formed The Naked and the Dead (1948). In 1955 he co-founded The Village Voice, and was the editor of Dissent from 1952 until 1963. Among his other works are The Armies of the Night (1968) The Executioner's Song (1980), both of which won Mailer a Pulitzer Prize.

If you enjoyed The Fight, you might like Gay Talese's Frank Sinatra Has a Cold, also available in Penguin Modern Classics.

"Entertaining... Mailer continues his familiar shadow-boxing with the ineffable." -- Time
In 1975 in Kinshasa, Zaire, at the virtual center of Africa, two African American boxers were paid five million dollars apiece to fight each other until one was declared winner. One was Muhammad Ali, the aging but irrepressible "professor of boxing" who vowed to reclaim the championship he had lost. The other was George Foreman, who was as taciturn as Ali was voluble and who kept his hands in his pockets "the way a hunter lays his rifle back into its velvet case." Observing them was Norman Mailer, whose grasp of the titanic battle's feints and stratagems -- and whose sensitivity to their deeper symbolism -- make this book a masterpiece of the literature of sport.
Whether he is analyzing the fighters' moves, interpreting their characters, or weighing their competing claims on the African and American souls, Mailer is a commentator of unparalleled energy, acumen, and audacity -- and su

Norman Mailer (1923-2007) was one of the great post-War American writers, both as a novelist and as one of the key inventors of the New Journalism. His books include the novels The Naked and the Dead, The Deer Park, Why Are We in Vietnam?, The Executioner's Song and Harlot's Ghost and the non-fiction works The Armies of the Night, A Fire on the Moon (published in the USA as Of a Fire on the Moon) and The Fight. He won the National Book Award and twice won the Pulitzer Prize.

GOR001238323
The Fight by Norman Mailer
Norman Mailer
Penguin Modern Classics
Used - Very Good
Paperback
Penguin Books Ltd
2000-07-27
256
0141184140
9780141184142
N/A
Book picture is for illustrative purposes only, actual binding, cover or edition may vary.
This is a used book - there is no escaping the fact it has been read by someone else and it will show signs of wear and previous use. Overall we expect it to be in very good condition, but if you are not entirely satisfied please get in touch with us.