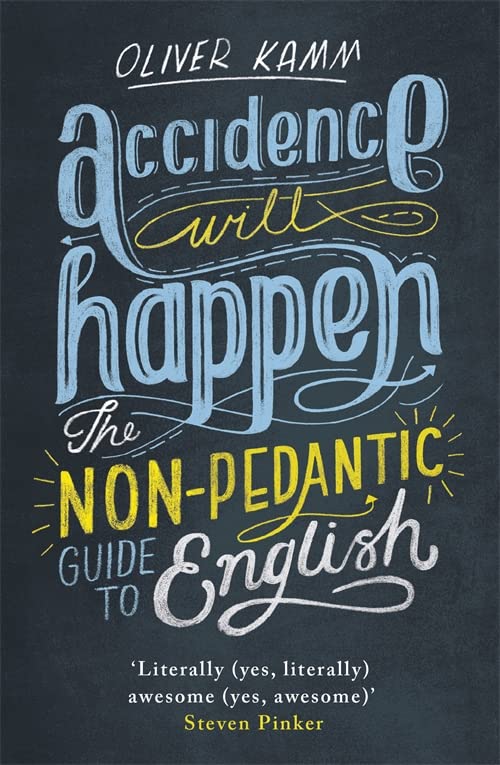 Accidence Will Happen
by Oliver Kamm

Used Price
$8.99
Free Shipping in the US
THE TIMES columnist Oliver Kamm takes on the pedants in this witty, authoritative and sometimes provocative guide to the use and abuse of the English language.
Reviews:
Trustpilot
Very Good

Accidence Will Happen: The Non-Pedantic Guide to English by Oliver Kamm

Are standards of English alright - or should that be all right?
To knowingly split an infinitive or not to?
And what about ending a sentence with preposition, or for that matter beginning one with 'and'?

We learn language by instinct, but good English, the pedants tell us, requires rules. Yet, as Oliver Kamm demonstrates, many of the purists' prohibitions are bogus and can be cheerfully disregarded. ACCIDENCE WILL HAPPEN is an authoritative and deeply reassuring guide to grammar, style and the linguistic conundrums we all face.

'A unique and indispensable guide to usage' STEVEN PINKER

'An immensely intelligent and playful polemic, cheeky and erudite by turns...certainly gets the blood pumping, so do read it' THE TIMES

A unique and indispensable guide to usage. It's distinguished by the author's keen discernment, his reliance on scholarship rather than dogma and superstition, and an ability to cite literary examples of contested constructions that is literally (yes, literally) awesome (yes, awesome) -- STEVEN PINKER
An immensely intelligent and playful polemic, cheeky and erudite by turns...certainly gets the blood pumping, so do read it * THE TIMES *
Entertaining and refreshing...a welcome corrective to the notion that there is an objective standard we should strive for, and a celebration of a language in flux * THE SUNDAY TIMES *
Kamm's tolerance is certainly more preferable to the bigotry of sticklers who treat grammatical lapses as crimes or sins * OBSERVER *
A joyous and joyously liberating assault on the 'rules' of grammar which are little more than a hodgepodge of contradictory superstitions. Kamm's weapons are erudition and raw polemical vigour...It is the most sensible style guide I have read, not least because Kamm always puts clarity first. I have only had ACCIDENCE WILL HAPPEN for a week, and have already referred to it dozens of times * THE SPECTATOR *
Delights by its puncturing of pomposity...and its identification of pronouncements that have no foundation in scholarship. It leaves the reader clear that debate in print about English usage is a branch of both entertainment and politics * TIMES LITERARY SUPPLEMENT *
A superb book, and I challenge any pedant to read it and not emerge with a more liberal view on usage * INDEPENDENT *
[Kamm's] case against the pedants is compelling: peddling made-up rules, they either stray into contradiction or are forced to denounce Milton as sloppy * THE SUNDAY TELEGRAPH *
This book came as a great relief. Although I feared I had a shaky grasp of formal grammar, Kamm reassures me that I have - in fact - acquired mastery as a native English speaker. With bracing confidence, he lays into pedants, sticklers and prescriptivists everywhere. Nevertheless, he's no anarchist: this book provides invaluable advice on writing with style, wit and verve * TIMES HIGHER EDUCATION SUPPLEMENT *

Oliver Kamm is a chief leader writer and columnist for THE TIMES. As a self-confessed reformed pedant he is the newspaper's unofficial expert on language and style, a subject he tackles in his long-running immensely popular weekly column, 'The Pedant'. View his profile at www.thetimes.co.uk/tto/public/profile/Oliver-Kamm
@OliverKamm

GOR007175895
Accidence Will Happen: The Non-Pedantic Guide to English by Oliver Kamm
Oliver Kamm
Used - Very Good
Paperback
Orion Publishing Co
2015-10-22
320
1780227957
9781780227955
N/A
Book picture is for illustrative purposes only, actual binding, cover or edition may vary.
This is a used book - there is no escaping the fact it has been read by someone else and it will show signs of wear and previous use. Overall we expect it to be in very good condition, but if you are not entirely satisfied please get in touch with us.