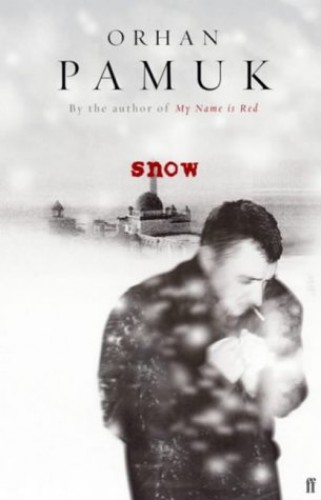 Used Price
$15.49
Free Shipping in the US
From the award-winning author of "My Name is Red" comes this political thriller. After 12 years in Germany, poet Ka returns to Istanbul for his mother's funeral. In a dangerous political atmosphere, the truth concerning the poet and the snow-covered old world city of Kars is revealed.
Reviews:
Trustpilot
Like New Very Good Good

From the award-winning author of 'My Name is Red' comes this political thriller. After 12 years in Germany, a poet Ka returns to Istanbul for his mother's funeral. In a dangerous political atmosphere, the truth concerning the poet and the snow-covered old world city of Kars is revealed.

"Richly detailed . . . A thrilling plot ingeniously shaped . . . Vividly embodies and painstakingly explores the collision of Western values with Islamic fundamentalism . . . An astonishingly complex, disturbing view of a world we owe it to ourselves to better understand." --"Kirkus Reviews
From the British reviews of "Snow
"A novel of profound relevance to the present moment. The debate between the forces of secularism and those of religious fanaticism is conducted with subtle, painful insight into the human weakness that can underlie both impulses." --Bel Mooney, "The Times
"'How much can we ever know about love and pain in another's heart? How much can we hope to understand those who have suffered deeper anguish, greater deprivation, and more crushing disappointments than we ourselves have known?' Such questions haunt the poet Ka . . . [in] this novel, as much about love as it is about politics." --Sarah Emily Miano, "The Observer
"Profound and frequently brilliant . . . Pamuk shows decisively that the European novel remains a form, and a freedom, for which we have reason to be thankful . . . "Snow illuminate[s] the confrontation between secular and extremist Islamic worlds better than any work of nonfiction I can think of." --Julian Evans, "New Statesman
"Brilliant . . . Hilarious . . . A gripping political thriller." --John de Falbe, "Spectator
"A melancholy farce full of rabbit-out-of-a-hat plot twists that, despite its locale, looks uncannily like the magic lantern show of misfire, denial, and pratfall that appears daily in our newspapers . . . Pamuk gives convincing proof that the solitary artist is a better bellwether than any televised think-tanker."--Stephen O'Shea, "Independent on Sunday
"A devastating parable of political extremism." --Angel Gurria-Quintana, "Financial Times
"Pamuk uses his powers to show us the critical dilemmas of modern Turkey. How European a country is it? How can it respond to fundamentalist Islam? And how can an artist deal with these issues? . . . He is the sort of writer for whom the Nobel Prize was invented." --Tom Payne, "Daily Telegraph

Orhan Pamuk was born in Istanbul in 1952 into a family of eng ineers. He was educated in Istanbul at an American school. He dropped out of his architecture course to become a full-time writer and obtained a degree in journalism from Istanbul University. Since 1982, when his first novel was published to great acclaim, Pamuk has been one of Turkey's most successful authors. After three years in the USA, including a stint as visiting fellow at the University of Iowa, he returned to Istanbul, where he lives with his wife and daughter. In 1995 Pamuk was among a group of authors tried for criticising the Turkish regime's treatment of the Kurds in a book of essays exercising the freedom of speech. He is the author of six novels. The White Castle won the 1990 Independent Award for Foreign Fiction, and the publication of The New Life caused a sensation in his native land, becoming the fastest-selling book in Turkish history. My Name is Red, publi

GOR010340174
Snow by Orhan Pamuk
Orhan Pamuk
Used - Like New
Hardback
Faber & Faber
2004-05-06
448
057121830X
9780571218301
N/A
Book picture is for illustrative purposes only, actual binding, cover or edition may vary.
This is a used book - there is no escaping the fact it has been read by someone else and it will show signs of wear and previous use. Overall we expect it to be in very good condition, but if you are not entirely satisfied please get in touch with us.