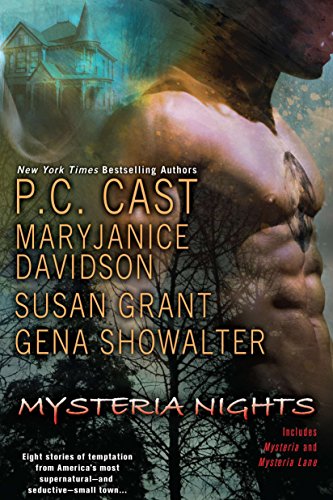 Welcome to Mysteria, Colorado, home to a vegan vampire, a neighborly werewolf, a pair of sisterly witches, a demon nanny, and many more creatures that go bump in the night. Passions run high in this hot two-in-one omnibus edition of Mysteria and Mysteria Lane.

Praise for Mysteria and Mysteria Lane

"Splitting the difference between Desperate Housewives and The X-Files, this paranormal romance brings magic and monsters to the steamy suburbs in four satisfying novellas about the town of Mysteria. There's magic, heat, and lots of laughs."--Publishers Weekly

"This super quartet of talent of brings an off-kilter and humorous viewpoint to magic, romance, and daily life. Much fun."--RT Book Reviews

P. C. Cast is the #1 New York Times bestselling author of the Goddess Summoning series, the House of Night Novels, and the Tales of a New World series. She is a member of the Oklahoma Writers Hall of Fame. Her novels have been awarded the prestigious Oklahoma Book Award, YALSA Quick Pick for Reluctant Readers, Romantic Times Reviewers' Choice Award, the Prism, Holt Medallion, Daphne du Maurier, Booksellers' Best, and the Laurel Wreath. Ms. Cast lives in Oregon surrounded by beloved cats, dogs, horses, and family.

MaryJanice Davidson is the New York Times bestselling author of several books, including the Undead novels featuring Vampire Queen Betsy Taylor. With her husband, Anthony Alongi, she also writes a series featuring a teen weredragon named Jennifer Scales. MaryJanice lives in Minneapolis with her husband and two children and is currently working on her next book.

Gena Showalter is the New York Times bestselling author of more than thirty novels in a wide range of genres. Her books have appeared in Cosmopolitan and Seventeen and have been nominated for the prestigious RITA Award, as well as the National Readers' Choice Award.