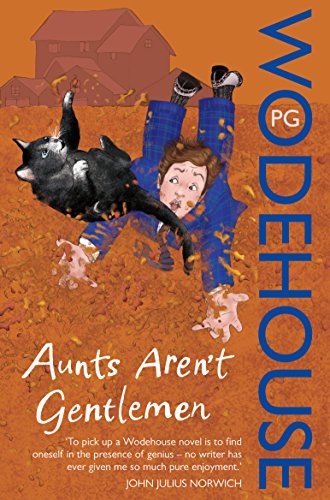 In Stock
$9.69
A Jeeves and Wooster novelBertie Wooster has been overdoing metropolitan life a bit, and the doctor orders fresh air in the depths of the country. But after moving with Jeeves to his cottage at Maiden Eggesford, Bertie soon finds himself surrounded by aunts - not only his redoubtable Aunt Dahlia but an aunt of Jeeves's too.
Very Good Good
16 in stock

A Jeeves and Wooster novel Bertie Wooster has been overdoing metropolitan life a bit, and the doctor orders fresh air in the depths of the country. But after moving with Jeeves to his cottage at Maiden Eggesford, Bertie soon finds himself surrounded by aunts - not only his redoubtable Aunt Dahlia but an aunt of Jeeves's too. Add a hyper-sensitive racehorse, a very important cat and a decidedly bossy fiancee - and all the ingredients are present for a plot in which aunts can exert their terrible authority. But Jeeves, of course, can cope with everything - even aunts, and even the country. The final Jeeves and Wooster novel shows P.G. Wodehouse still able to delight, well into his nineties.

GOR001241242
Aunts Aren't Gentlemen: (Jeeves & Wooster) by P. G. Wodehouse
P. G. Wodehouse
Jeeves & Wooster
Used - Very Good
Paperback
Cornerstone
2008-01-10
192
0099513978
9780099513971
N/A
Book picture is for illustrative purposes only, actual binding, cover or edition may vary.
This is a used book - there is no escaping the fact it has been read by someone else and it will show signs of wear and previous use. Overall we expect it to be in very good condition, but if you are not entirely satisfied please get in touch with us.