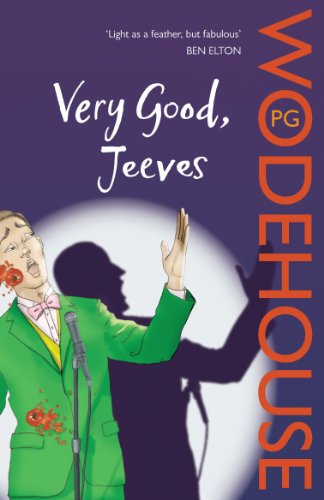 In Stock
$11.39
A collection of Jeeves stories, every one a winner, in which Jeeves endeavours to give satisfaction: by saving a grumpy cabinet minister from being marooned and attacked by a swan - in the process saving Bertie Wooster from his impending doom, and by rescuing Bingo Little and Tuppy Glossop from the soup (twice each).
Like New
Only 1 left

A Jeeves and Wooster collection

An outstanding collection of Jeeves stories, every one a winner, in which Jeeves endeavours to give satisfaction: By saving a grumpy cabinet minister from being marooned and attacked by a swan - in the process saving Bertie Wooster from his impending doom...By rescuing Bingo Little and Tuppy Glossop from the soup (twice each)...By arranging rather too many performances of the song 'Sonny Boy' to a not very appreciative audience...And by a variety of other sparkling stratagems that should reduce you to helpless laughter. This early collection shows P.G.Wodehouse at the top of his game, writing with sublime wit and delicacy of plotting.

It's dangerous to use the word genius to describe a writer, but I'll risk it with him -- John Humphrys
For as long as I'm immersed in a P.G. Wodehouse book, it's possible to keep the real world at bay and live in a far, far nicer, funnier one where happy endings are the order of the day -- Marian Keyes
Wodehouse always lifts your spirits, no matter how high they happen to be already -- Lynne Truss
The incomparable and timeless genius - perfect for readers of all ages, shapes and sizes! -- Kate Mosse
Not only the funniest English novelist who ever wrote but one of our finest stylists -- Susan Hill

GOR007959417
Very Good, Jeeves: (Jeeves & Wooster) by P. G. Wodehouse
P. G. Wodehouse
Jeeves & Wooster
Used - Like New
Paperback
Cornerstone
2008-05-01
320
0099513722
9780099513728
N/A
Book picture is for illustrative purposes only, actual binding, cover or edition may vary.
The book has been read, but looks new. The book cover has no visible wear, and the dust jacket is included if applicable. No missing or damaged pages, no tears, possible very minimal creasing, no underlining or highlighting of text, and no writing in the margins.