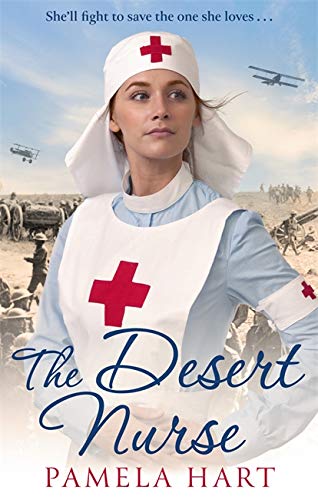 The Desert Nurse
by Pamela Hart

Used Price
7,19 $
Free Shipping in the US
A grand love story set in a far-flung theatre of war, from the bestselling Australian author of The War Bride, Pamela Hart
Reviews:
Trustpilot
Very Good

The Desert Nurse by Pamela Hart

A grand love story set in a far-flung theatre of war, from the bestselling Australian author of The War Bride, Pamela Hart

Amid the Australian Army hospitals of World War I Egypt, two deeply determined individuals find the resilience of their love tested to its limits . . .

It's 1911, and 21-year-old Evelyn Northey desperately wants to become a doctor. Her father forbids it, withholding the inheritance that would allow her to attend university. At the outbreak of World War I, Evelyn disobeys her father, enlisting as an army nurse bound for Egypt and the disastrous Gallipoli campaign.

Under the blazing desert sun, Evelyn develops feelings for polio survivor Dr William Brent, who believes his disability makes him unfit to marry. For Evelyn, still pursuing her goal of studying medicine, a man has no place in her future. For two such self-reliant people, relying on someone else for happiness may be the hardest challenge of all . . .

From the casualty tents, the fever wards and the operating theatres of the palace; through the streets of Cairo during Ramadan, to the parched desert and the grim realities of war, Pamela Hart, beloved bestselling Australian author of The War Bride, tells the heart-wrenching story of four years that changed the world forever.

'This book is heart-wrenching proof that all's NOT fair in love and war, especially for a lone woman in a man's world.' Valerie Parv on A Letter From Italy

Pamela is an award-winning author for adults and children. She has a Doctorate of Creative Arts from the University of Technology, Sydney. Under the name Pamela Freeman she wrote the historical novel The Black Dress, which won the NSW Premier's History Prize for 2006. Pamela is also well known for her fantasy novels for adults, published by Orbit worldwide, the Castings Trilogy, and her Aurealis Award-winning novel Ember and Ash. Pamela lives in Sydney with her husband and their son, and teaches at the Australian Writers' Centre. The Desert Nurse follows her bestselling novels The Soldier's Wife, The War Bride and A Letter From Italy.

GOR010087456
The Desert Nurse by Pamela Hart
Pamela Hart
Used - Very Good
Paperback
Little, Brown Book Group
2019-08-22
416
0349417148
9780349417141
N/A
Book picture is for illustrative purposes only, actual binding, cover or edition may vary.
This is a used book - there is no escaping the fact it has been read by someone else and it will show signs of wear and previous use. Overall we expect it to be in very good condition, but if you are not entirely satisfied please get in touch with us.