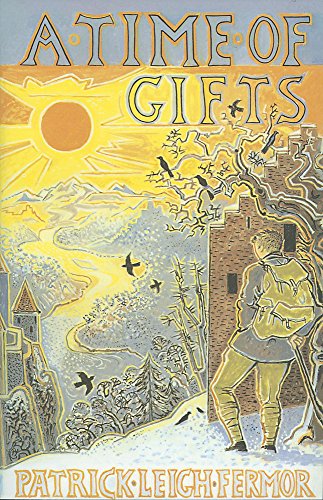 A Time of Gifts
by Patrick Leigh Fermor

Used Price
$10,99
Free Shipping in the US
The great travel classic, first published in 1977 and recounting an epic journey of nearly 50 years before, reissued in paperback with an Introduction by Jan Morris
Reviews:
Trustpilot
Very Good Good

A Time of Gifts Summary

A Time of Gifts: On Foot to Constantinople: from the Hook of Holland to the Middle Danube by Patrick Leigh Fermor

In 1933, at the age of 18, Patrick Leigh Fermor set out on an extraordinary journey by foot - from the Hook of Holland to Constantinople. A Time of Gifts is the first volume in a trilogy recounting the trip, and takes the reader with him as far as Hungary.

It is a book of compelling glimpses - not only of the events which were curdling Europe at that time, but also of its resplendent domes and monasteries, its great rivers, the sun on the Bavarian snow, the storks and frogs, the hospitable burgomasters who welcomed him, and that world's grandeurs and courtesies. His powers of recollection have astonishing sweep and verve, and the scope is majestic.

Customer Reviews - A Time of Gifts

A Time of Gifts Reviews

[Fermor's] gloriously ornate account of that epic journey is a classic of what we might call the 'literature of the leg' * Robert Macfarlane, Waitrose Weekend *
Nothing short of a masterpiece * Jan Morris *
A treasure chest of descriptive writing * Spectator *
Not only is the journey one of physical adventure but of cultural awakening. Architecture, art, genealogy, quirks of history and language are all devoured - and here passed on - with a gusto uniquely his * Colin Thubron, Sunday Telegraph *
Every page of this book is distinguished by an image, a metaphor, a flash of humour always original and sometimes as incisive as a laser beam. * Vincent Cronin *
A tremendous journey ... and he's fabulous company * Manchester Evening News *
This is a traveller's tale at its infectious and informative best; vividly remembered and beautifully written * Church Times *
John Murray is doing the decent thing and reissuing all of Leigh Fermor's main books ... But what else would you expect from a publisher whose commitment to geography is such that for more than two centuries it has widened our understanding of the world? * Geographical Magazine *
Rightly considered to be among the most beautiful travel books in the language * Independent *
Bringing the landscape alive as no other writer can, he uses his profound and eclectic understanding of cultures and peoples ... to paint vivid pictures - nobody has illuminated the geography of Europe better * Geographical Magazine *

CIN000417603
A Time of Gifts: On Foot to Constantinople: from the Hook of Holland to the Middle Danube by Patrick Leigh Fermor
Patrick Leigh Fermor
Used - Very Good
Paperback
Hodder & Stoughton General Division
2004-03-15
384
0719566959
9780719566950
N/A
Book picture is for illustrative purposes only, actual binding, cover or edition may vary.
This is a used book - there is no escaping the fact it has been read by someone else and it will show signs of wear and previous use. Overall we expect it to be in very good condition, but if you are not entirely satisfied please get in touch with us.