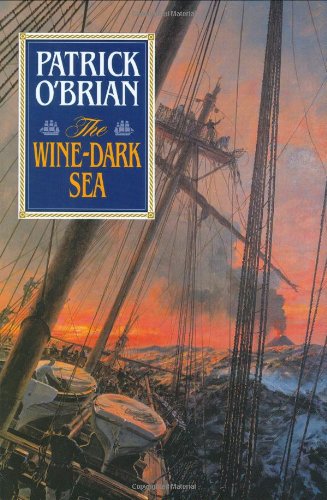 The Wine-Dark Sea
by Patrick O'Brian

Used Price
$10.69
Free Shipping in the US
The sixteenth volume in the Aubrey/Maturin series, and Patrick O'Brian's first bestseller in the United States.
Reviews:
Trustpilot
Very Good

The Wine-Dark Sea by Patrick O'Brian

At the outset of this adventure filled with disaster and delight, Jack Aubrey and Stephen Maturin pursue an American privateer through the Great South Sea. The strange color of the ocean reminds Stephen of Homer's famous description, and portends an underwater volcanic eruption that will create a new island overnight and leave an indelible impression on the reader's imagination.

Their ship, the Surprise, is now also a privateer, the better to escape diplomatic complications from Stephen's mission, which is to ignite the revolutionary tinder of South America. Jack will survive a desperate open boat journey and come face to face with his illegitimate black son; Stephen, caught up in the aftermath of his failed coup, will flee for his life into the high, frozen wastes of the Andes; and Patrick O'Brian's brilliantly detailed narrative will reunite them at last in a breathtaking chase through stormy seas and icebergs south of Cape Horn, where the hunters suddenly become the hunted.

"I haven't read novels [in the past ten years] except for all of the Patrick O'Brian series. It was, unfortunately, like tripping on heroin. I started on those books and couldn't stop." -- E. O. Wilson - Boston Globe
"Addictively readable." -- Chicago Tribune
"They're funny, they're exciting, they're informative. . . there are legions of us who gladly ship out time and time again under Captain Aubrey." -- The New Yorker
"lf Jane Austen had written rousing sea yarns, she would have produced something very close to the prose of Patrick O'Brian." -- Time

One of our greatest contemporary novelists, Patrick O'Brian is the author of the bestselling Aubrey/Maturin tales and the biographer of Joseph Banks and Picasso. O'Brian's many books include Testimonies, The Golden Ocean, and The Unknown Shore.

GOR001293130
The Wine-Dark Sea by Patrick O'Brian
Patrick O'Brian
Aubrey/Maturin Novels
Used - Very Good
Hardback
WW Norton & Co
1993-12-07
272
0393035581
9780393035582
N/A
Book picture is for illustrative purposes only, actual binding, cover or edition may vary.
This is a used book - there is no escaping the fact it has been read by someone else and it will show signs of wear and previous use. Overall we expect it to be in very good condition, but if you are not entirely satisfied please get in touch with us.