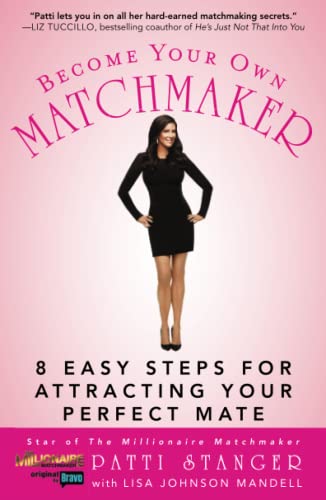 Become Your Own Matchmaker
by Patti Stanger

Used Price
$9.39
Free Shipping in the US
BECOME YOUR OWN MATCHMAKERby Bravo TV's "Millionaire Matchmaker" teaches women of all ages how to find the man of their dreams in less than a year.
Reviews:
Trustpilot
Very Good

Become Your Own Matchmaker Summary

Become Your Own Matchmaker: 8 Easy Steps for Attracting Your Perfect Mate by Patti Stanger

Patti Stanger's wildly successful reality series "The Millionaire Matchmaker," has become one of Bravo's most successful shows ever. As a matchmaker she has been in the enviable position of having men all over the country open themselves up and reveal to her what attracted them and induced them to make lifelong commitments and what deterred them from settling down.

Now in her book, BECOME YOUR OWN MATCHMAKER: 8 Easy Steps for Attracting Your Perfect Mate,Patti shares her secrets with readers, compiling her best tried and tested advice to help women of all ages and backgrounds learn to become their own matchmaker and find the man of their dreams in less than a year. Her pointers and advice are easy and accessible, and will enable all women to find their own perfect match. Patti pledges if you follow her advice and commit to this program, within a year you'll be walking down the aisle with Mr. Right For You.

Customer Reviews - Become Your Own Matchmaker

Patti Stanger is the star and executive producer of her own television show, the wildly successful Millionaire Matchmaker, on Bravo. But Patti had been receiving worldwide kudos long before her show aired. A third generation matchmaker, she founded the Millionaire's Club in January of 2000 after serving five years as the Director of Marketing/Special Events for Great Expectations, (the oldest and largest dating service in the U.S.).

Her wildly successful matchmaking efforts have been featured on Oprah, E!, MTV, Dateline, Dr. Phil, Ellen, Tyra, NBC News, The Big Idea with Donnie Deutsch and numerous other television shows, as well as in Marie Claire, Elle, Glamour, the New York Times, Forbes, The National Enquirer, the Washington Post and many more. She is a popular guest on talk and news shows throughout the world, and is frequently accessed as a dating resource by international media outlets.

Lisa Johnson Mandell is the author of the tongue-in-cheek How to Snare a Millionaire (St. Martin's Press) and countless dating articles for women's magazines, she is an award-winning journalist who has appeared on news and talk shows including Dr. Phil, Inside Edition, Montel, CNBC and many others. Her work has been featured in The London Times, The New York Times, Mademoiselle, Forbes, The Wall Street Journal on the AP wire service and on myriad internet news services. She has been a popular lecturer at Learning Annex classes, where she entertains students with encouraging accounts of love and dating, and is a frequently quoted as an expert by various media sources throughout the world. Lisa also appears on "The Millionaire Matchmaker" and has most recently spoken on CNN, Rachael Ray, Fox News, Backstage with Barry Nolan, Australian national television and Telemundo (she speaks fluent Spanish). Her Hollywood insider blog, known as `In Hollywood with Lisa Johnson' can be found on Filmstew.com, and her own personal website, LisaLiveInHollywood, has attracted amazing traffic since it's launch. She can be heard daily giving syndicated entertainment and lifestyle reports on radio stations in major markets throughout the US.

GOR003778220
Become Your Own Matchmaker: 8 Easy Steps for Attracting Your Perfect Mate by Patti Stanger
Patti Stanger
Used - Very Good
Paperback
Atria Books
2010-04-16
288
1416597719
9781416597711
N/A
Book picture is for illustrative purposes only, actual binding, cover or edition may vary.
This is a used book - there is no escaping the fact it has been read by someone else and it will show signs of wear and previous use. Overall we expect it to be in very good condition, but if you are not entirely satisfied please get in touch with us.