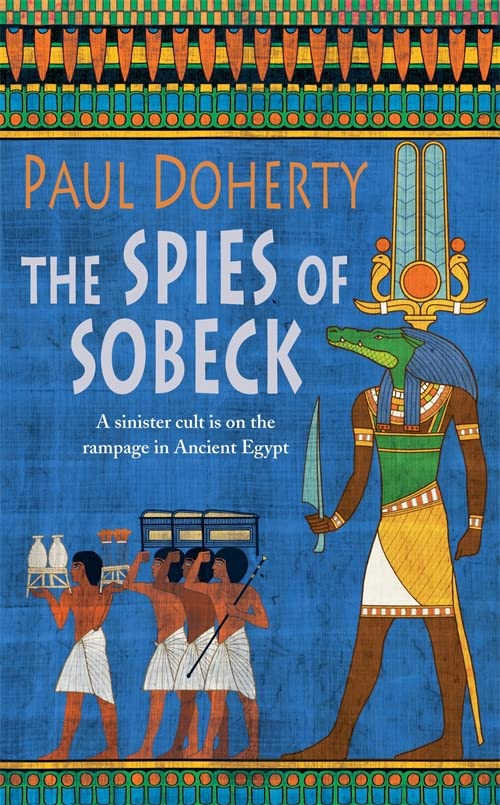 The Spies of Sobeck (Amerotke Mysteries, Book 7)
by Paul Doherty

The Spies of Sobeck (Amerotke Mysteries, Book 7): Murder and intrigue from Ancient Egypt by Paul Doherty

In Paul Doherty's new novel, Amerotke, Chief Judge of the Hall of Two Truths, is once again summoned to the Imperial Palaceo: Tekreth, Guardian of the Door of Sobeck, has fallen to his death from the roof of his stately mansion. According to all evidence, it was an accident but Pharaoh Queen Hatusu is not convinced. Increasingly worried about reports of mysterious disappearances along the Sobeck Road, the imperial highway stretching south, she believes that Tekreth's death could be part of a far greater problem. Amerotke, aware of the reports from the Sobeck Road, has also heard rumours about the Shemai, a cult devoted to death, based along its borders. Before Amerotke can start to consider either of these matters though, a gruesome mass murder occurs at the Necropolis. The funeral party for revered scribe, Ptulimis, has been poisoned and Amerotke must immediately investigate the abomination. As Amerotke probes further, he suspects that all these events may be connected and that dangerous forces are at work in Pharaoh Hatusu's realm. Will Amerotke be able to uncover the truth before Egypt is overrun by its sinister and dangerous underworld?

Praise for Paul Doherty and his other novels: 'Resurrectionist magic * New York Times *
The best of its kind since the death of Ellis Peters * Time Out *
I really like these medieval whodunnits * Bookseller *
Historically informative, excellently plotted and, as ever, superbly entertaining * CADS 20 *
This rich tale ... seeps authenticity and is written with wonderfully efficient style. A gem of an historical thriller * Huddersfield Daily Examiner *
The maestro of medieval mystery * Books Magazine *
Doherty dazzles with his story-telling * Nottingham Evening Post *

Paul Doherty was born in Middlesbrough. He studied History at Liverpool and Oxford Universities and obtained a doctorate for his thesis on Edward II and Queen Isabella. He is now headmaster of a school in north-east London and lives with his family in Essex.

GOR001599695
The Spies of Sobeck (Amerotke Mysteries, Book 7): Murder and intrigue from Ancient Egypt by Paul Doherty
Paul Doherty
Used - Very Good
Paperback
Headline Publishing Group
2009-04-02
320
0755338472
9780755338474
N/A
Book picture is for illustrative purposes only, actual binding, cover or edition may vary.
The book has been read but remains in clean condition. All pages are intact and the cover is intact. Some minor wear to the spine.