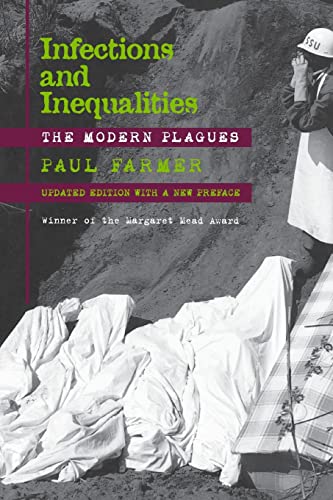 Infections and Inequalities
by Paul Farmer

Used Price
$5.99
Free Shipping in the US
Challenging the accepted methodologies of epidemiology and international health, this book points out that most explanatory strategies, from 'cost-effectiveness' to patient 'noncompliance,' inevitably lead to blaming the victims.
Reviews:
Trustpilot
Very Good

Infections and Inequalities: The Modern Plagues by Paul Farmer

Paul Farmer has battled AIDS in rural Haiti and deadly strains of drug-resistant tuberculosis in the slums of Peru. A physician-anthropologist with more than fifteen years in the field, Farmer writes from the front lines of the war against these modern plagues and shows why, even more than those of history, they target the poor. This 'peculiarly modern inequality' that permeates AIDS, TB, malaria, and typhoid in the modern world, and that feeds emerging (or re-emerging) infectious diseases such as Ebola and cholera, is laid bare in Farmer's harrowing stories of sickness and suffering. Challenging the accepted methodologies of epidemiology and international health, he points out that most current explanatory strategies, from 'cost-effectiveness' to patient 'noncompliance,' inevitably lead to blaming the victims. In reality, larger forces, global as well as local, determine why some people are sick and others are shielded from risk. Yet this moving account is far from a hopeless inventory of insoluble problems. Farmer writes of what can be done in the face of seemingly overwhelming odds, by physicians determined to treat those in need. "Infections and Inequalities" weds meticulous scholarship with a passion for solutions - remedies for the plagues of the poor and the social maladies that have sustained them.

"The only things that distinguish Farmer's account from a Dostoevskian novel is a meed of hard, effective science and a depressingly familiar story of the powerfully malignant of racism.... It is hard to think of more compelling examples to underpin his arguments. It makes the book and its message accessible to the general reader and forcefully reminds doctors, nurses, scientists, sociologists, economists and aid workers of their unfinished business.... But the main lessons he draws are for us all. We must do all we can to diminish social inequality." - Hugh Pennington, Times Higher Education Supplement "A strangely uplifting read. Infections and Inequalities is a powerful and rigorously argued critique of economic and health care inequality." - Phil Whitaker, The Guardian (UK) "Bolstered by thorough knowledge of the countries in which he practiced, relevant and cogent case histories, and a caring but disciplined attitude, Farmer powerfully argues for substantial changes in epidemiological theory and practice. He raises thought-provoking and necessary questions, and he provides answers that, if often unsettling, are pertinent and capable of being put to use by individuals and governments truly interested in solving, not sidestepping, life-threatening situations." - William Beatty, Booklist"

Paul Farmer directs the Program in Infectious Disease and Social Change at the Harvard Medical School and divides his clinical time between Boston's Brigham and Women's Hospital and the Clinique Bon Sauveur in central Haiti. He is the author of AIDS and Accusation (California, 1992), which was awarded the Wellcome Medal, and The Uses of Haiti (1994), and editor of Women, Poverty and AIDS (1996), which won the Eileen Basker Prize.

1. The Vitality of Practice: On Personal Trajectories
2. Rethinking "Emerging Infectious Diseases"
3. Invisible Women: Class, Gender, and HIV
4. The Exotic and the Mundane:
Human Immunodeficiency Vrrus in the Caribbean
5. Culture, Poverty, and ffiV Transmission:
The Case of Rural Haiti
Miracles and Misery: An Ethnographic Interlude
6. Sending Sickness:
Sorcery, Politics, and Changing Concepts
of AIDS in Rural Haiti
7. The Consumption of the Poor:
Tuberculosis .in the Late Twentieth Century
8. Optimism and Pessimism in Tuberculosis Control:
Lessons from Rural Haiti
9. Immodest Claims of Causality:
Social Scientists and the "New" Tuberculosis
10. The Persistent Plagues:
Biological Expressions of Social Inequalities

CIN000300460
Infections and Inequalities: The Modern Plagues by Paul Farmer
Paul Farmer
Used - Very Good
Paperback
University of California Press
2001-02-23
424
0520229134
9780520229136
N/A
Book picture is for illustrative purposes only, actual binding, cover or edition may vary.
This is a used book - there is no escaping the fact it has been read by someone else and it will show signs of wear and previous use. Overall we expect it to be in very good condition, but if you are not entirely satisfied please get in touch with us.