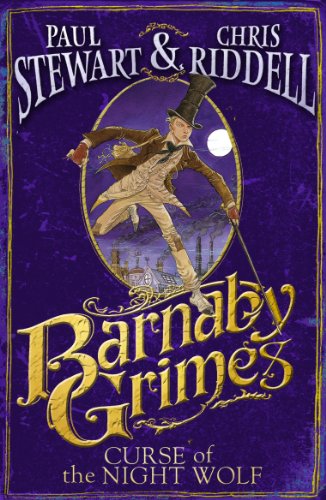 Barnaby Grimes: Curse of the Night Wolf
by Paul Stewart

In Stock
9,69 $
Barnaby Grimes is a tick-tock lad, running errands in his city, day and night, and 'high-stacking' around the rooftops in search of new mysteries to solve. Is there a link between the tonic and the huge dogs - or possibly wolves - that are roaming the city at night?
Very Good Good
Only 3 left

Barnaby Grimes: Curse of the Night Wolf by Paul Stewart

Barnaby Grimes is a tick-tock lad, running errands in his city, day and night, and 'high-stacking' around the rooftops in search of new mysteries to solve. In this first adventure, Barnaby is attacked one night by an enormous dog. He kills it - but that's not the end of this particular mystery . . . as Barnaby finds himself swept up in a world of crooked doctors, poor and ill-advised patients, strange tonics and very expensive furs... Could there be more to the seemingly respectable Dr Cadwallader and the tonics he doles out to the poor? Is there a link between the tonic and the huge dogs - or possibly wolves - that are roaming the city at night? When Barnaby's old acquaintance Benjamin goes missing, Barnaby fears the worst for him, and decides to dig deeper... A fantastic romp through a Dickensian-style city, with a wonderful new hero in the guise of Barnaby. This new series from the bestselling dream team of Stewart and Riddell is a must for all fans of the Edge Chronicles - but also for fans of Horowitz and Shan, as they move into new territory and deliver a brilliantly exciting thriller-horror for boys.

"Chris Riddell's spindly spidery illustrations . . . capture perfectly the eccentric ebullient nature of the book . . . Quite graphic in its violence, this one will be relished by boys of nine and up" -- Philip Womack * Literary Review *
"It is a page-turning adventure, written with gusto and inventiveness" * The Sunday Times *
"Thrilling and often downright frightening" * Through the Looking Glass *
"The spine felt a definite tingle, but the stomach never lurched . . . the writing is superb. It delivers a period feel without ever descending into pastiche. Highly recommended" * thebookbag.co.uk *
"Don't miss this Dickensian thriller!" * Kraze Club *

GOR001247645
Barnaby Grimes: Curse of the Night Wolf by Paul Stewart
Paul Stewart
Barnaby Grimes
Used - Very Good
Paperback
Random House Children's Publishers UK
2008-01-03
224
0552556211
9780552556217
N/A
Book picture is for illustrative purposes only, actual binding, cover or edition may vary.
This is a used book - there is no escaping the fact it has been read by someone else and it will show signs of wear and previous use. Overall we expect it to be in very good condition, but if you are not entirely satisfied please get in touch with us.