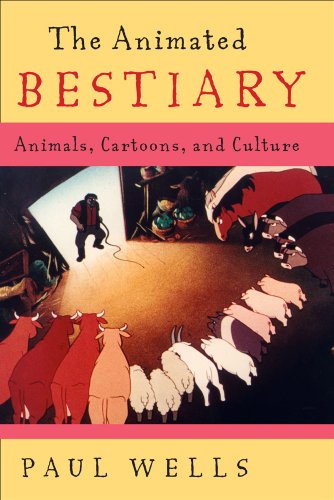 The Animated Bestiary
by Paul Wells

Used Price
$128.99
Free Shipping in the US
Evaluates the depiction of animals in cartoons and animation. This title argues that artists use animals to engage with issues that would be more difficult to address directly because of political, religious, or social taboos.
Reviews:
Trustpilot
Very Good

The Animated Bestiary: Animals, Cartoons, and Culture by Paul Wells

Cartoonists and animators have given animals human characteristics for so long that audiences are now accustomed to seeing Bugs Bunny singing opera and Mickey Mouse walking his dog Pluto.

The Animated Bestiary critically evaluates the depiction of animals in cartoons and animation more generally. Paul Wells argues that artists use animals to engage with issues that would be more difficult to address directly because of political, religious, or social taboos. Consequently, and principally through anthropomorphism, animation uses animals to play out a performance of gender, sex and sexuality, racial and national traits, and shifting identity, often challenging how we think about ourselves.

Wells draws on a wide range of examples, from the original King Kongto Nick Park's Chicken Run to Disney cartoonsusuch as Tarzan, The Jungle Book, and Brother Bearuto reflect on people by looking at the ways in which they respond to animals in cartoons and films.

Wells has proven himself to be a leading scholar of animation and has here produced a solid piece of scholarship that shows an incredible breadth of knowledge.--Eric Smoodin "author of Regarding Frank Capra: Audience, Celebrity, and American Film Studies, "

Paul Wells is the director of animation in the Animation Academy at Loughborough University. He is the author of several books, including Animation and America(Rutgers University Press), Understanding Animation, and Fundamentals of Animation.

GOR010064708
The Animated Bestiary: Animals, Cartoons, and Culture by Paul Wells
Paul Wells
Used - Very Good
Hardback
Rutgers University Press
2009-01-15
0813544149
9780813544144
N/A
Book picture is for illustrative purposes only, actual binding, cover or edition may vary.
This is a used book - there is no escaping the fact it has been read by someone else and it will show signs of wear and previous use. Overall we expect it to be in very good condition, but if you are not entirely satisfied please get in touch with us.