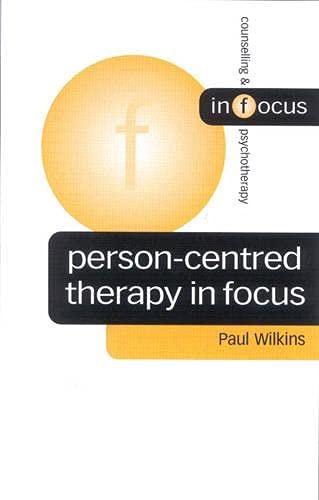 Person-Centred Therapy in Focus provides a much-needed exploration of the criticisms levelled against one of the most widespread forms of therapeutic practice. Characterized by its critics as theoretically `light', culturally biased and limited in application, until now the person-centred approach has had comparatively little written in its defence.

Paul Wilkins provides a rigorous and systematic response to the critics, drawing not only on the work of Carl Rogers, but also of those central to more recent developments in theory and practice (including Goff Barrett-Lennard, Dave Mearns, Jerold Bozarth, Germain Leitauer and Brian Thorne). It traces the epistemological foundations of person-centred therapy and places the approach in its social and political context.

Examining the central tenets of the approach, each chapter sets out concisely the criticisms and then counters these with arguments from the person-centred perspective. Chapters cover debates in relation to:

- the model of the person

Person-Centred Therapy in Focus fulfills two important purposes: firstly to answer the criticisms of those who have attacked the person-centred approach and secondly to cultivate a greater critical awareness and understanding within the approach itself. As such it makes a significant contribution to the person-centred literature and provides an excellent resource for use in training.

Introduction So Just What Is Person-Centred Therapy? `More than Just a Psychotherapy' An Important Social and Political Context or Unjustified Complacency? The Underlying Epistemology Outmoded Twentieth-Century Modernism? The Model of the Person An Insufficient Base? Self-Actualization A Culture-Bound, Naive and Optimistic View of Human Nature? The Core Conditions Necessary but Insufficient? `Non-Directivity' A Fiction and an Irresponsible Denial of Power? An Absent Psychopathology A Therapy for the Worried Well? Reflection A Simple Technique of Little Effect? The Issue of Boundaries Harmfully Sloppy Ethics?

GOR001583366
Person-Centred Therapy in Focus by Paul Wilkins
Paul Wilkins
Counselling & Psychotherapy in Focus Series
Used - Very Good
Paperback
SAGE Publications Inc
2002-12-13
148
0761964878
9780761964872
N/A
Book picture is for illustrative purposes only, actual binding, cover or edition may vary.
This is a used book - there is no escaping the fact it has been read by someone else and it will show signs of wear and previous use. Overall we expect it to be in very good condition, but if you are not entirely satisfied please get in touch with us.