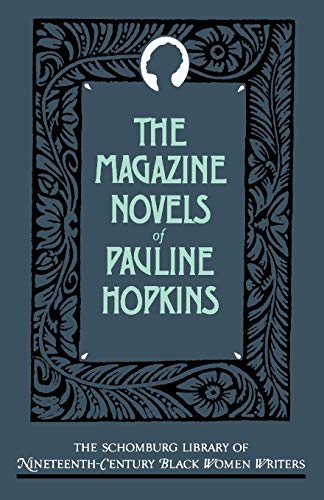 The Magazine Novels of Pauline Hopkins
by Pauline E. Hopkins

The Magazine Novels of Pauline Hopkins: (Including Hagar's Daughter, Winona, and Of One Blood) by Pauline E. Hopkins

First published in May 1900, the Colored American Magazine provided a pioneering forum for black literary talent previously stifled by lack of encouragement and opportunity. Not only a prolific writer for the journal, Pauline Hopkins also served as one of its powerful editorial forces. This volume of her magazine novels, which appeared serially in the journal between March 1901 and November 1903, reveals Hopkins' commitment to fiction as a vehicle for social change. She weaves important political themes into the narrative formulas of nineteenth-century dime-store novels and story papers, which emphasize suspense, action, complex plotting, multiple and false identities, and the use of disguise. Offering both instruction and entertainment, Hopkins' novels also expose the limitations of popular American narrative forms when telling the stories of black characters.

Brilliant....It is not hard to imagine that, once her fiction is given the attention it deserves, Hopkins could replace Chestnutt as the foremost black novelist of the period. * Eric J. Sundquist in The New York Times Book Review *
The three novels published in the Schomburg Library for the first time since their appearance in The Colored American Magazine from 1901 to 1903 not only represent an early example of black people producing popular fiction for and about themselves, but extend the cultural and political discourse introduced in Harper's novel [Iola Leroy]. * The Women's Review of Books *

GOR007104491
The Magazine Novels of Pauline Hopkins: (Including Hagar's Daughter, Winona, and Of One Blood) by Pauline E. Hopkins
Pauline E. Hopkins
The Schomburg Library of Nineteenth-Century Black Women Writers
Used - Very Good
Paperback
Oxford University Press Inc
1990-07-12
672
0195063252
9780195063257
N/A
Book picture is for illustrative purposes only, actual binding, cover or edition may vary.
This is a used book - there is no escaping the fact it has been read by someone else and it will show signs of wear and previous use. Overall we expect it to be in very good condition, but if you are not entirely satisfied please get in touch with us.